RF chip, just read this one!

RF:Generally, it is the part of sending and receiving information;

Baseband:Generally, it is the part of information processing;

Power management:Generally, it is the part of power saving. Because mobile phones are equipment with limited energy, power management is very important;peripheral:Generally including LCD, keyboard, casing, etc;Software:It generally includes system, driver, middleware and application.
In the mobile terminal, the most important core is RF chip and baseband chip.RF chip is responsible for RF transceiver, frequency synthesis and power amplification; Baseband chip is responsible for signal processing and protocol processing.So what is the relationship between RF chip and baseband chip?
Relationship between RF chip and baseband chip Both radio frequency and base band come from English literal translation.The earliest application of RF is radio - Radio Broadcasting (FM / AM), which is still the most classic application in RF technology and even radio field.
Baseband is the signal with the center point of the band at 0Hz, so baseband is the most basic signal.Some people also call baseband "unmodulated signal". Once this concept was right. For example, am is a modulated signal (without modulation, the content can be read through the sound producing components after receiving).
However, for the field of modern communication, baseband signal usually refers to the digitally modulated signal with the spectrum center at 0Hz.Moreover, there is no clear concept that the baseband must be analog or digital, which depends on the specific implementation mechanism.
To get down to business, baseband chips can be considered to include modems, but not only modems, but also channel codec, source codec, and some signaling processing.RF chip can be regarded as the simplest up conversion and down conversion of baseband modulation signal.
The so-called modulation is the project of modulating the signal to be transmitted to the carrier through certain rules and sending it through the RF transceiver. Demodulation is the opposite process.
Working principle and circuit analysis Radio frequency is abbreviated as RF. Radio frequency is radio frequency current. It is a kind of high-frequency alternating electromagnetic wave. It is the abbreviation of radio frequency. It represents the electromagnetic frequency that can be radiated into space. The frequency range is 300kHz ~ 300GHZ.AC current with less than 1000 changes per second is called low-frequency current, and AC current with more than 10000 changes per second is called high-frequency current, and RF is such a high-frequency current.High frequency (greater than 10k); Radio frequency (300k-300g) is the higher frequency band of high frequency; Microwave frequency band (300m-300g) is the higher frequency band of RF.Radio frequency technology is widely used in the field of wireless communication. Cable TV system adopts radio frequency transmission.
RF chip refers to an electronic component that converts radio signal communication into a certain radio signal waveform and sends it through antenna resonance. It includes power amplifier, low noise amplifier and antenna switch.RF chip architecture includes two parts: receiving channel and transmitting channel. 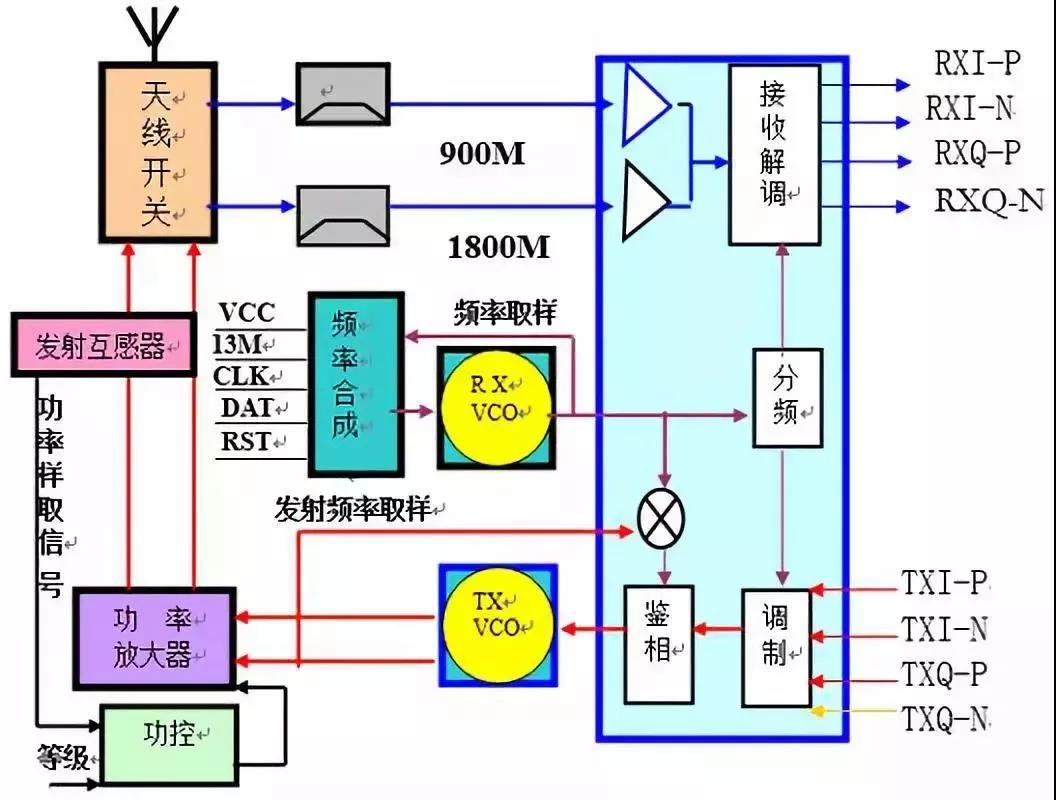 RF circuit block diagram
Structure and working principle of receiving circuit When receiving, the antenna converts the electromagnetic wave sent by the base station into a weak AC current signal, which is filtered, amplified at high frequency, sent to the if for demodulation to obtain the received baseband information (rxi-p, rxi-n, rxq-p, rxq-n); Sent to the logic audio circuit for further processing.
Key points of this circuit:
1. Receiving circuit structure;
2. Function and function of each element;
3. Receive signal flow.
circuit structure
The receiving circuit consists of antenna, antenna switch, filter, high amplifier (low noise amplifier), if integrated block (receiving demodulator), etc.Early mobile phones had primary and secondary mixing circuits to reduce the receiving frequency and then demodulate (as shown in the figure below).

Receiving circuit block diagram
2. Function and function of each element 1) . mobile phone antenna:Structure:(as shown below)The mobile phone antenna is divided into external antenna and built-in antenna; It is composed of antenna base, solenoid and plastic envelope.

effect:
a) When receiving, the electromagnetic wave sent by the base station is converted into a weak AC current signal.
b) During transmission, the AC current amplified by the power amplifier is converted into electromagnetic wave signal.
2) . antenna switch:
Structure:(as shown below)The mobile phone antenna switch (combiner, duplex filter) is composed of four electronic switches. 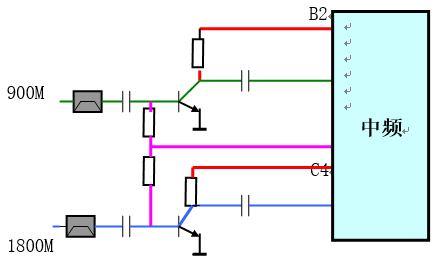 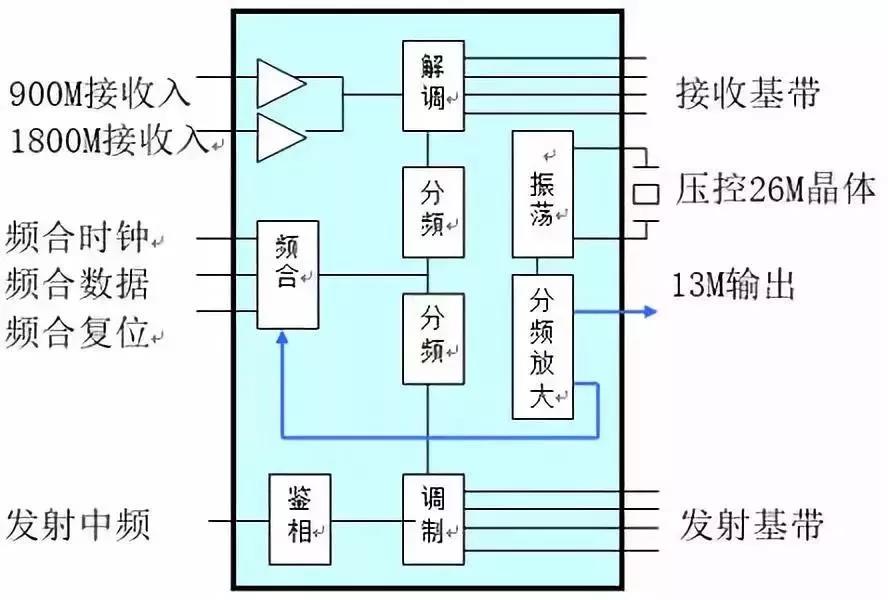 effect:
a) . the internal high-voltage amplifier amplifies the weak current induced by the antenna;
b) When receiving, demodulate the received carrier frequency signal (with opposite party information) of 935m-960m (GSM) and the local oscillator signal (without information) to obtain the received baseband information of 67.707khz;
c) During transmission, the transmission information processed by the logic circuit and the local oscillator signal are modulated into the transmission if;
d) Combine 13m / 26m crystal to generate 13m clock (reference clock circuit);e) According to the reference signal sent by the CPU, the local oscillator signal conforming to the working channel of the mobile phone is generated.
3. Signal receiving process When the mobile phone is received, the antenna converts the electromagnetic wave sent by the base station into a weak AC current signal, passes through the antenna switch receiving path, sends it to the high-frequency filter to filter out other useless clutter, and obtains the pure 935m-960m (GSM) received signal, which is coupled by the capacitor and sent to the corresponding high amplifier in the if for amplification, and then sent to the demodulator and the LO signal (without information) for demodulation, Obtain 67.707khz received baseband information (rxi-p, rxi-n, rxq-p, rxq-n); Sent to the logic audio circuit for further processing.
Structure and working principle of transmitting circuit During transmission, the transmitted baseband information processed by the logic circuit is modulated into the transmitted if, and the tx-vco is used to change the transmitted if signal frequency into 890m-915m (GSM) frequency signal.After being amplified by the power amplifier, it is converted into electromagnetic wave by the antenna and radiated out.
Key points of this circuit:
(1) . circuit structure;
(2) Function and function of each element;
(3) . signal transmission process.
circuit structure
The transmitting circuit consists of a transmitting modulator and a transmitting phase detector in the if; Transmission voltage controlled oscillator (tx-vco), power amplifier (power amplifier), power controller (power control), transmission transformer and other circuits.(as shown below) 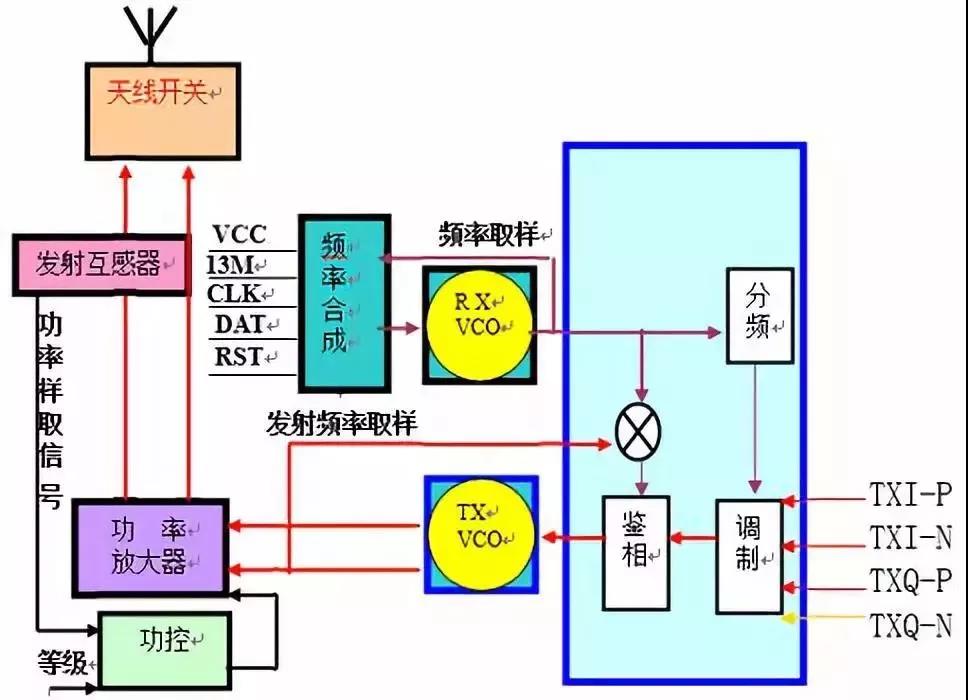 Transmitting circuit block diagram
2. Function and function of each element 1) . transmission modulator:Structure:The transmission modulator is inside the if, which is equivalent to the mod in the broadband network.effect:During transmission, transmit baseband information (txi-p; txi-n; txq-p; txq-n) processed by logic circuit and local oscillator signal are modulated into transmit if.
2) Transmitting voltage controlled oscillator (tx-vco):Structure:The transmitting voltage controlled oscillator is a capacitive three-point oscillation circuit whose output frequency is controlled by voltage; During manufacturing, it is integrated into a small circuit board and leads out five pins:Power supply pin, grounding pin, output pin, control pin, 900m / 1800m band switching pin.When there is a suitable working voltage, it oscillates to produce the corresponding frequency signal.
effect:The transmitted if signal modulated by the if internal modulator is converted into 890m-915m (GSM) frequency signal that can be received by the base station.
Principle:As we all know, the base station can only receive 890m-915m (GSM) frequency signal, but the IF signal modulated by the IF modulator (such as 135m IF signal transmitted by Samsung) cannot be received by the base station. Therefore, tx-vco should be used to change the frequency of the transmitted if signal to 890m-915m (GSM) frequency signal.
When transmitting, the power supply part sends 3vtx voltage to make tx-vco work and generate 890m-915m (GSM) frequency signal in two ways:
a) . the sample is sent back to the if, mixed with the local oscillator signal to generate a transmit frequency discrimination signal equal to the transmit if, and sent to the phase discriminator for comparison with the transmit if; If the oscillation frequency of tx-vco does not conform to the working channel of the mobile phone, the phase detector will generate 1-4v jump voltage (DC voltage with AC transmission information) to control the capacitance of the varactor inside tx-vco to adjust the frequency accuracy.

4) . transmitting transformer:Structure:Two coils with equal wire diameter and number of turns are close to each other and are composed of mutual inductance principle.effect:Sample the transmitting power and current of the power amplifier and send it to the power control.Principle:When the transmitting power current of the power amplifier passes through the transmitting transformer during transmission, a current of the same size as the power current is induced in its secondary, which is sent to the power control after detection (high-frequency rectification).
5) . power level signal:The so-called power level is that engineers divide the received signal into eight levels when programming the mobile phone, and each receiving level corresponds to one level of transmission power (as shown in the table below). When the mobile phone is working, the CPU judges the distance between the mobile phone and the base station according to the received signal strength, and sends the appropriate transmission level signal, so as to determine the amplification amount of the power amplifier (that is, when the reception is strong, the transmission is weak).
Attached power level table:

6) . power controller (power control):Structure:It is an operational comparison amplifier.
effect:Comparing the transmitted power current sampling signal with the power level signal, a suitable voltage signal is obtained to control the amplification of the power amplifier.

Current situation of domestic RF chip industry chain In the field of RF chips, the market is mainly monopolized by overseas giants. In terms of domestic RF chips, no company can independently support the operation mode of IDM, mainly fabless design companies; Domestic enterprises have formed the operation mode of "soft IDM" through the coordination of design, OEM and packaging.

In terms of RF chip design, domestic companies have made achievements in 5g chips and have a certain shipping capacity.RF chip design has a high threshold. With RF development experience, it can accelerate the development of subsequent advanced RF chips.
In terms of RF chip packaging, on the one hand, the increase of 5g RF chip frequency leads to a greater impact on the circuit performance of the connecting line in the circuit, and the length of the signal connecting line needs to be reduced during packaging; On the other hand, the power amplifier, low noise amplifier, switch and filter need to be encapsulated into a module to reduce the volume on the one hand and facilitate the use of downstream terminal manufacturers on the other hand.In order to reduce the parasitism of RF parameters, flip chip, fan in and fan out packaging technologies need to be adopted.
When flip chip, fan in and fan out processes are packaged, there is no need to connect the signal through the gold wire bonding line, which reduces the parasitic electrical effect caused by the gold wire bonding line and improves the RF performance of the chip; In the 5g era, high-performance flip chip / fan in / fan out combined with SIP packaging technology will be the trend of packaging in the future.

Flip chip / fan in / fan out and sip packages belong to advanced packaging, and their profitability is much higher than that of traditional packaging.Domestic listed companies have formed a complete packaging capacity of flipchip SIP technology.

The content comes from the network/wave filter, this website only provides reprint. The views, positions and technologies of this article have nothing to do with this website. If there is infringement, please contact us to delete it!

Prev：What are the characteristics of GPS antenna module products? What company has good strength
Next：Three conditions for GPS module antenna manufacturers to cooperate