Events
Home -Events -Industry News -NB-IoT and LORA account for 83%of the share, and the low-power satellite IoT becomes a breakthrough.

Since 2016, Low Power Wide Area Network (LPWAN) has been a hot topic in the IoT industry. Recently, a report released by the Internet of Things research organization IoT Analytics shows that although the Internet of Things market is adversely affected by the dual adverse effects of the new crown epidemic and chip shortages, LPWAN still maintains strong growth.

According to the monitoring of IoT Analytics, despite the isolation of many countries due to the epidemic in the second and third quarters, the number of activated devices supporting LPWAN in 2020 will still reach 450 million units, a year-on-year growth rate of 62%, especially in epidemic prevention and control and IoT applications where supply chain visualization plays an important role are growing rapidly; the number is expected to be 660 million in 2021, a year-on-year increase of 47%, and the number of LPWAN connections is expected to reach 2.7 billion in 5 years. 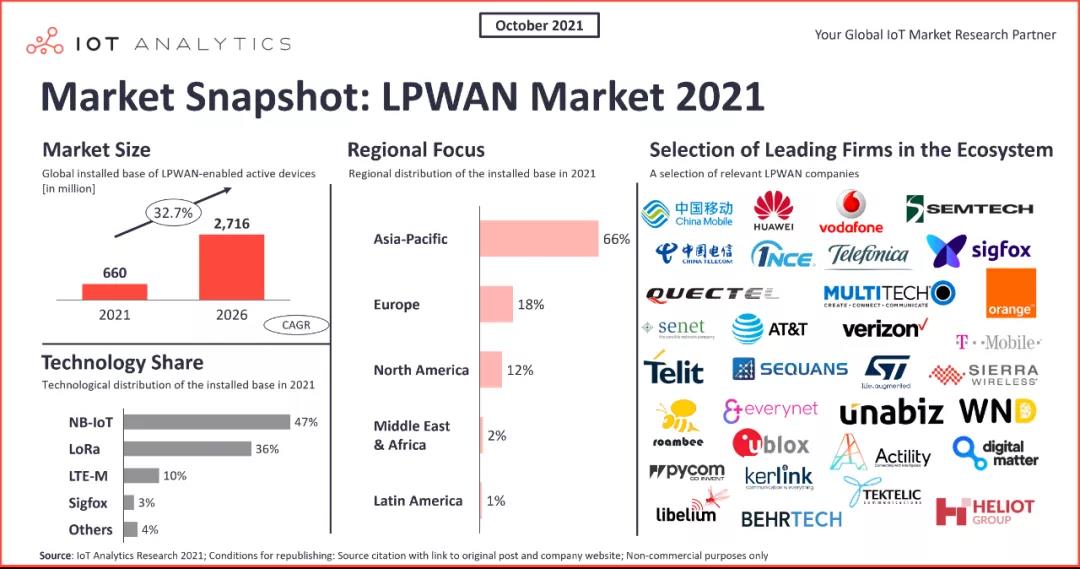 In the past year or so, some new changes have taken place in the global LPWAN field, which IoT Analytics summarizes. Based on the actual situation in China and the exchanges with domestic enterprises in related fields, the author comprehensively analyzes the viewpoints of IoT Analytics from five aspects.

First, the "2+2" pattern has been further stabilized, accounting for more than 96% of the market share

Specifically, NB-IoT leads with a 47% share; followed by LoRa with 36% market share; LTE-M with 10% and Sigfox with 3%. Therefore, this pattern can basically be described as "2+2", in which NB-IoT and LoRa have a clear lead, occupying 83% of the share; LTE-M and Sigfox occupy a small market share, and the remaining technologies are very scattered , the market share is negligible.

At the beginning of 2020, IoT Analytics monitoring data showed that these four types of technologies accounted for 92% of the market in 2019, and this share increased by 2 percentage points two years later. Not only has the concentration increased, but the structure has also undergone significant changes. NB-IoT has become the technology with the largest connection scale in the LPWAN field. 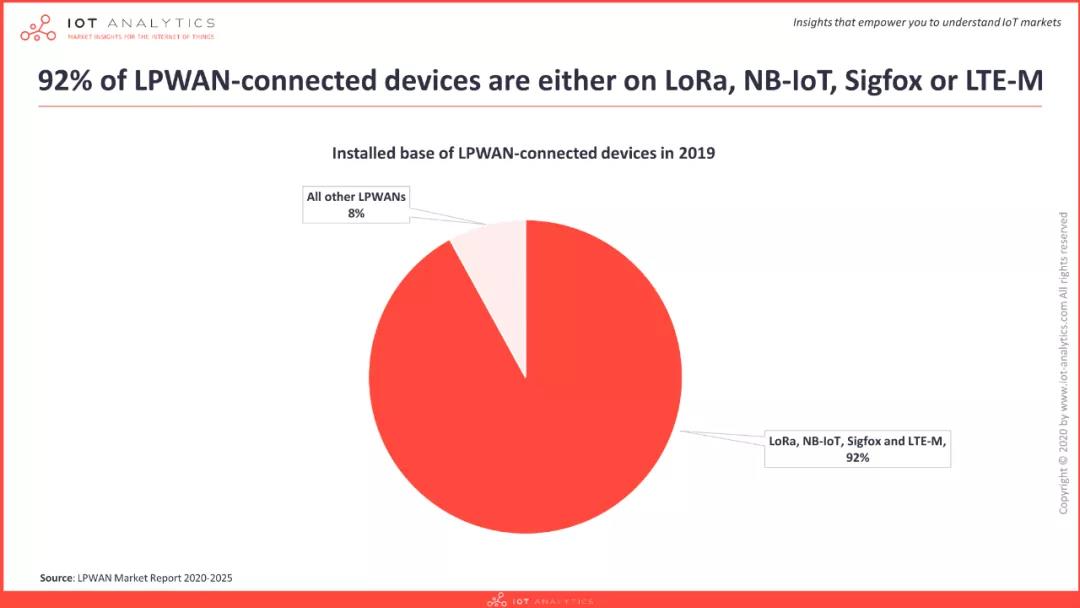 LPWAN eventually formed a "2+2" pattern, which is the result of the role of ecosystem management. These 4 types of technologies, especially the first 2 types, have rich ecosystem members and are supported by a large number of leading enterprises, including mainstream operators and equipment giants, making customers have a wider range of choices.

IoT Analytics predicts that in the next five years, NB-IoT and LoRa will continue to dominate the LPWAN market, with LTE-M and Sigfox ranking third and fourth respectively, and these 2 types of technologies are unlikely to surpass NB-IoT and LoRa. Other LPWAN technologies such as Weightless and RPMA will continue to exist. In recent years, there has also been a large number of new entrants developing new technologies that can serve as an alternative to mainstream technologies for certain vertical applications, but they do not appear to threaten the market leader in the next few years.

Second, the Chinese market is still the largest, but the global market is undergoing some changes

Undoubtedly, the number of LPWAN connections in the Chinese market still accounts for the majority of the global share. The high attention paid to the digital economy in China is also driving the rapid expansion of the scale of the Internet of Things. In the outline of the national "14th Five-Year Plan", "accelerating digital development and building a digital China" is a separate chapter, and it is proposed to "promote the comprehensive development of the Internet of Things, and build the Internet of Things access capability that supports the integration of fixed and mobile, and the combination of wide and narrow". The policy ensures that China's Internet of Things market application will remain a global leader in the next five years.

As far as LPWAN is concerned, China's digital work in many industries has adopted LPWAN more widely than other countries. In the past few years, China has become the largest user of the LPWAN market, with the most NB-IoT and LoRa connection nodes. According to the latest forecast of IoT Analytics, in 2020, the number of LPWAN connections in China will account for 80% of the global total, and it will still reach 76% by the end of 2021.

However, changes in the international situation have made subtle changes in the global application of LPWAN technology. On the one hand, although NB-IoT has been recognized by mainstream operators around the world, there are still a large number of overseas operators who choose to deploy LTE-M networks; market began to slow down.

For example, IoT Analytics noted that Semtech said in an earnings call in 2021 that while nearly 50% of its current LoRa-related revenue is from China, the market may change in the future, with 21% of its potential revenue coming from China China, and 70% from Europe and America.

Third, smart metering is still the largest application scenario of LPWAN, and the epidemic has further increased its penetration rate

Smart meters such as water meters and gas meters are the earliest and by far the largest application scenarios in the LPWAN market, both in China and around the world. IoT Analytics cites several large smart metering projects with LPWAN connections that have been initiated or completed in the past two years:

In Europe, countries such as Italy, Sweden, Lithuania and the Netherlands have installed more than 1 million or more electricity and gas meters connected via NB-IoT or LTE-M, respectively.

In 2020, China Telecom claims to have more than 20 million smart water meters and more than 25 million gas meters connected to its nationwide NB-IoT network. Recently, China Telecom updated the NB-IoT data, the number of smart gas meter connections exceeded 42 million, and the number of smart water connections exceeded 32 million, both ranking first in the world.

In Saudi Arabia, a project of more than 5 million NB-IoT smart meters is underway.

In Japan, NICIGAS has completed the retrofitting of 850,000 gas meters with Sigfox technology.

During 2020, major IoT suppliers said that the demand for various IoT applications related to fighting the epidemic has surged, especially those involving measures to control the spread of the virus and provide supply chain visualization. The former such as disinfection and cleaning management, the latter such as Food and medical cold chain monitoring. For example, NB-IoT door sensor has played a major role in the epidemic, helping to automate the management of isolation places. Many NB-IoT door sensor manufacturers have been in a state of short supply or out of stock.

Although smart meters are the largest market for LPWAN, domestic and foreign manufacturers are also working hard to develop new areas in recent years. From the perspective of the domestic market, in addition to water meters and gas meters, fire protection, white electricity, trackers and other fields are also the direction of further expansion.

Fourth, low-power satellite IoT connectivity could be a game-changer in the long run

While most vendors are still in the early market stage, with many still in technology trials and satellite launches, a few have already rolled out commercial solutions. Of course, these programs are usually limited to specific customers or specific geographic areas, such as Astrocast, Myriota, and Swarm Technologies (later acquired by SpaceX).

IoT Analytics believes that low-power satellite IoT technology is not yet proven, so it will take a few years for this connectivity market to kick in. Also, most vendors are rolling out their own proprietary solutions rather than agreeing on specific standards. However, these solutions have delivered on the promise of a significant reduction in the cost of traditional satellite solutions, enabling ubiquitous network coverage at low cost, and will subsequently become a significant market force in the second half of the 2020s or 1930s.

Fifth, 2G/3G migration brings opportunities, but it is not progressing according to the expected path

2G/3G migration brings new opportunities to LPWAN. After all, users had no choice before, and now there is a more suitable IoT network. Many operators around the world have launched 2G/3G network withdrawal plans, especially 3G network withdrawal speed is faster. In China, the No. 25 document issued by the Ministry of Industry and Information Technology in May 2020 opened the prelude to the migration of 2G/3G networks, and then operators quickly followed up. For example, China Mobile made it clear that it will no longer develop 2G IoT users by the end of 2020.

However, the 2G/3G network withdrawal did not bring the expected rapid succession of LPWAN, and in many regions, this migration speed was slower than expected.

On the one hand, because the 2G network is "deep-rooted", it has provided services for nearly 30 years, and still carries many voice users and IoT users. For example, China Mobile currently has more than 900 million IoT connections, of which more than half are carried by the 2G network. , IoT device life cycle is very long, in this case, 2G can only slowly exit. Some overseas operators expect 2G networks to remain in service for many years, and some even expect to be out of service in 2030. On the other hand, LTE Cat.1 has risen rapidly in the past two years. With the advantages of extensive 4G network and low cost, it has undertaken a large number of 2G/3G IoT connections that have been retired, indirectly replacing LPWAN to a certain extent.

In 2021, the attention of LTE Cat.1 has far surpassed that of NB-IoT, becoming the main force for the growth of cellular IoT.

Of course, LPWAN has maintained a double-digit growth rate and is still one of the most noteworthy areas in the IoT market. As the simplest and lowest-cost wide-area IoT solution, it is bringing digital opportunities to a large number of industries. There is no shortage of innovators in this market, and there is no winner-take-all pattern. Although NB-IoT has further consolidated its leading position, unlicensed spectrum technologies such as LoRa and Sigfox are also demonstrating their ability to respond quickly to market demands and serve customers, jointly promoting the prosperity of the IoT market.

The content comes from the Internet/Internet of Things think tank. This website only provides reprints. The opinions, standpoints, technologies, etc. of this article have nothing to do with this website. If there is any infringement, please contact us to delete it!