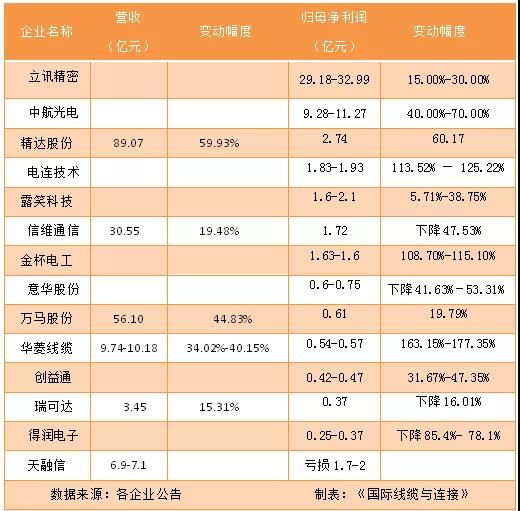 Note: some data have not been published yet

Based on the diversified layout and development of the company in different markets and product types, all employees of the company have made concerted efforts to continuously improve their ability to resist risks for many years. During the forecast period, the company's performance is expected to achieve steady growth.

In the first half of 2021, due to the impact of foreign epidemic, the domestic electromagnetic wire market is very popular, and the company, as the leading product in the industry, is in short supply. Under the correct leadership of the board of directors, the company gives full play to the advantages of leading position in the industry, seizes opportunities, increases market share and consolidates brand leading advantages under the guidance of the company's "bipolar stretching" strategy. In the first half of 2021, the total output of the company's products was 159215 tons, the sales revenue was 8.907 billion yuan, and the total profit was 390 million yuan.

3. The business related to RF connectors in the non mobile phone industry represented by the automotive electronics industry is growing rapidly;

4. With the continuous expansion of business scale, the platform advantages of precision manufacturing process of main products are becoming more and more obvious, the automation efficiency is continuously improved, the production cost control is more powerful, and the gross profit margin of main products is increased year-on-year;

5. The impact of non recurring profit and loss on net profit in the reporting period is about 16 million yuan.

The company's manufacturing industry grew steadily and its photovoltaic power generation business remained stable. At the same time, it contributed some profits to the company to focus on its main business and peel off its energy-saving motor business.

In the first half of 2021, the company achieved an operating revenue of 3.055 billion yuan, an increase of about 19.48% over the same period last year, maintaining a sustained growth. Mature businesses such as antenna, wireless charging and EMI / EMC maintained steady growth; New businesses such as LCP, BTB, UWB, passive components and automotive interconnection are accelerating their expansion. During the reporting period, the company realized a net profit attributable to the shareholders of the listed company of RMB 172.4386 million, a decrease of 47.53% over the same period of the previous year.

The company is in the stage of business transformation and optimization, and the net profit has been affected periodically: ① the company has increased the expansion of new businesses. New businesses such as LCP, BTB, UWB, passive components and automobile interconnection are in the stage of accelerating the expansion, which has contributed to the revenue. With the gradual expansion of new businesses, it will become the growth point of performance contribution. ② The first half of the year is the off-season of the consumer electronics industry. The capacity utilization efficiency of the company's mature business is low, affecting the gross profit margin; In the second half of the year, with the arrival of the peak season, the contribution effect to the company's performance will be improved. ③ In the first half of the year, the price of raw materials rose rapidly, and the cost side of the company was also affected to a certain extent.

1. In 2020, the company's production and operation were affected by the epidemic, the production and market order recovered and the performance returned to normal in the reporting period.

2. During the reporting period, on the one hand, the company vigorously expanded the market and actively carried out channel deep cultivation, key customer development, group resource integration and other work; On the other hand, according to the market demand, we increased R & D investment, optimized product structure, strengthened cost control, further improved the competitiveness of wire and cable and electromagnetic wire products, and the overall business situation continued to improve.

3. Tongli electric, the newly added secondary subsidiary in the consolidated statements of the reporting period, has strong downstream demand, prosperous production and sales, and substantial growth in operating performance.

During the reporting period, as the global epidemic was gradually controlled, the economic operation at home and abroad gradually recovered, resulting in the recovery of market demand. However, the rising prices of the company's main materials have brought challenges to the operation capacity of industrial chain enterprises. The company actively responds to market changes by orderly carrying out hedging business and continuously improving the level of lean production. During the reporting period, the company realized the growth of sales scale and the improvement of profits.

Affected by the continuous optimization of the company's product structure, the company expects that the proportion of sales revenue of aerospace, weapon equipment and other special cables with high product added value and relatively high gross profit margin in the first half of 2021 will continue the trend from January to March 2021, which is expected to increase significantly compared with the same period last year. The overall sales gross profit margin of the company in the first half of 2021 is expected to increase greatly compared with the same period last year, Thus, the profit growth rate is significantly higher than the revenue growth rate in the same period.

Affected by the rise of bulk materials and the shortage of automotive chips, the company's operation is uncertain.

2. During the reporting period, the increase of the company's R & D and sales expenses resulted in a year-on-year increase of about 57% in the expenses during the network security business, which had a certain impact on the company's profits in the current period.

This content comes from the network / electronic intelligent manufacturing industry. This website only provides reprint. The views, positions and technologies of this article have nothing to do with this website. If there is infringement, please contact us to delete it!

Prev：Golden beacon: a brief analysis of the origin and characteristics of connectors- Part II
Next：The new type C interface will eliminate the old USB interface and become a memory