Events
Home -Events -Industry News -It is a leader in wireless private network communication, covering all military services, land, sea and air, with a R & D expense rate of more than 20% and a net profit of more than 34% CAGR in recent five years

It is a leader in wireless private network communication, covering all military services, land, sea and air, with a R & D expense rate of more than 20% and a net profit of more than 34% CAGR in recent five years

The full name of 712 is Tianjin 712 communication and Broadcasting Co., Ltd., formerly known as Hunan Electric Appliance Factory established in 1936. In 2004, Tongguang group, Zhonghuan group, Tongguang group labor union and Tianjin Trust jointly funded the establishment of 712 Co., Ltd. after being restructured into a joint-stock company in 2016, it was listed on February 26, 2018.

The growth rate of net profit exceeded that of revenue mainly becauseHigh margin system products increased.In 2020, the business revenue of 712 system products will reach RMB 1.089 billion, accounting for 40.38% of the total revenue, an increase of 11.54 percentage points compared with 28.84% in 2019. There is a faint momentum of occupying half of the country, and the growth rate is very fierce. 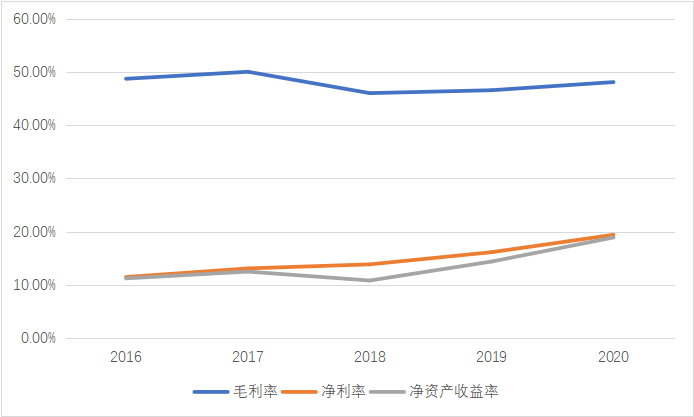 From the situation in recent years, except 2018, the net profit margin, gross profit margin and roe are basically upward.

When it comes to military industry, it is naturally inseparableThe background of increasing defense expenditure is the basis of the growth path of many military enterprises.

From 2016 to 2020, the growth rate of China's national defense budget was 7.6%, 7.0%, 8.1%, 7.5% and 6.60% respectively, but the proportion of expenditure still lags behind that of developed countries. According to the data of the third party Stockholm International Peace Research Institute,In recent years, China's military spending has accounted for 1.9% of its total GDP。 In contrast, in other countries, such as the United States, Russia, South Korea and India, China's military spending accounts for only 1.9% of GDP.

Therefore, the increase of China's defense budget is the general trend.2021In the central general public budget expenditure arrangement,National defense expenditure was 1.36 trillion yuan, an increase of 6.8% over the budget implementation of the previous year,We will continue to maintain moderate and stable growth. 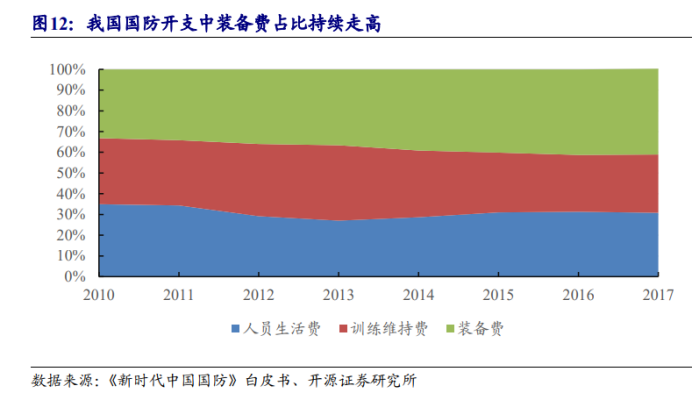 This also brings a good opportunity for the development of military wireless communication.Sun Tzu's art of war says that he knows himself and the enemy and is invincible in a hundred battles. As we all know, modern warfare is information warfare, which destroys when it is discovered and decisive when it is launched, communication plays a vital role in national defense.

However, at present, there are also some shortcomings. For example, at the strategic level, the communication systems of various services and services in China are incompatible with each other, and the degree of interconnection between various systems is not high; At the tactical level, there are some problems in the Chinese military information system, such as the lack of connectivity of communication equipment of different systems.

High and new military technologies with information technology as the core are changing with each passing day,The evolution of war form to information war has accelerated, and intelligent war has begun to take shape. The trend of long-range precision, intelligence, stealth and unmanned weapons and equipment is more obvious. For the volume, weight, power consumption, capacity, rate, delay, bandwidth, communication distance, coordination ability, anti-interference, anti interception, reconfiguration Integration and other war technical indicators pose great challenges. A large number of communication equipment need to be upgraded or newly developed to meet the needs of new combat methods, which has brought huge market space for military communication.

And July 1Second, it is the core supplier and main manufacturer of our army's wireless communication equipment, and it is one of the few enterprises in the industry that can achieve full service coverage.

The company started with ultrashort wave and has strong strength in the field of airborne,The products cover fighter, bomber, transport aircraft, helicopter, UAV, trainer and other platforms. With years of profound technical accumulation and high R & D investment, the company has expanded the data link in the field of airborne ultrashort wave and has always maintained the domestic leading level in terms of anti-interference, confidentiality and networking.

In addition to flying in the sky, running on the ground and swimming in the sea, 712 products and systems can be used. The downstream products include land, sea, air, rocket army, strategic support force and armed police force, which are distributed in the fifth World War area and more than 500 division and regiment level units. It is the main supplier of ultrashort wave wireless communication equipment of our army.

For a long time, the construction of communication systems of various services in China has been relatively independent. Some forces once had the problem of "poor connection and poor connection" in joint training. Under the background of modern joint operations, inter service communication has become an important bottleneck for the exertion of our army's combat effectiveness.Under the general trend of "service compatibility", the company's products across multiple services are expected to benefit.

Due to the special field, few can compete with July 12. The military private network communication industry has certain requirements for military industry qualification and product technology,High qualification and technical barriers have been formed for new entrants, and the degree of market competition is low.

In addition to the military field, 712 products are also widely used in the field of railway and urban rail transit. 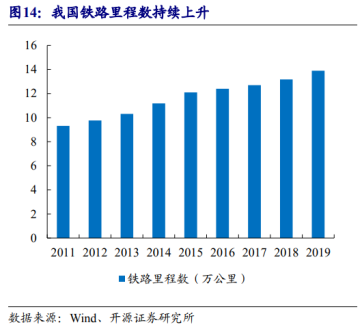 In the field of urban rail transit, more and more cities have planned and approved urban rail projects in recent years. For example, the construction plan of Intercity Railway in Dawan District of Guangdong, Hong Kong and Macao approved in August 2020 involves a mileage of more than 4700 kilometers and a predicted investment of more than 474.1 billion yuan.

Although it is a civil market, there are high technical barriers and specific industry management policies in the railway wireless communication industry, which also belongs to the pattern of oligopoly.

in general,At present, the company's civil products account for a low proportion of revenue and profit,In 2020, under the influence of the epidemic, the income declined, but the company will adjust the strategic positioning of civil products in the future,It is expected to build the company's second growth curve.

The formation of the company's industry position is related to the high R & D intensity. 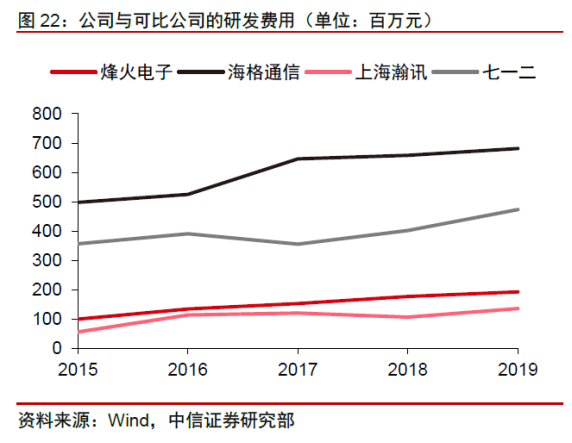 The company said that most of the core technologies of professional wireless communication products are self-developed, have independent intellectual property rights, have exclusive technologies in some markets with access barriers, and always maintain the domestic leading level in anti-interference, confidentiality and networking.In terms of technical reserves, the companyIt has accumulated advanced theoretical and practical foundation in the field of product R & D and production process research,Deeply participate in the formulation of some communication systems and industry standards, and have mastered the corresponding core and key technologies.

712 in recent years, the increase in the proportion of high gross profit system products also depends on the successful development of airborne CNI system, marking the company's leap from single product R & D to system integration R & D.It is expected that with the gradual industrialization of R & D achievements, the company's revenue performance is expected to maintain long-term steady growth.

Of course, considering that the R & D cost ratio is indeed quite high, if the demand for downstream products is weak and the technology cannot be converted into income, it will have an adverse impact.

Disclaimer: This article comes from the InternetReprinted from“Research value Youdao”, support the protection of intellectual property rights. Please indicate the original source and author for reprint. If there is infringement, please contact us for deletion.