The results of the first "shortage survey of electronic components" in 2021: top ten findings and three suggestions

1、 Manufacturing enterprises actively participate in the survey, and the sample of enterprises is valid

In the sample of this survey, manufacturing enterprises accounted for the largest proportion, 60.7%, and solution companies accounted for 15.6%. Chip design, distribution agents and e-commerce platforms also account for a certain proportion. We believe that most of the samples in this survey are chip demand enterprises and some component supply enterprises (original factory, distribution and e-commerce platform). For the authenticity and validity of the results, there should be enough sampling.

Table 1: 60% of manufacturing enterprises participated in the survey      Data source: survey on shortage of electronic components in 2021

2、 The proportion of R & D and managers is high, and the front line directly feeds back the truth of the industry

Table 2: more than 60% of the research participants are R & D posts, and more than 10% are managers.      Data source: survey on shortage of electronic components in 2021

It can be seen from the above two data that this survey has been strongly supported and responded by the R & D engineers of terminal manufacturing enterprises and scheme design companies, which can basically reflect the front-line and real feedback of the current R & D personnel in the electronic manufacturing industry on the shortage of electronic components.

From the perspective of the industries to which the respondents belong, the distribution is relatively uniform, mainly including consumer electronics, industrial control, household appliances / smart home, automotive electronics, network communication, Internet of things and medical electronics, accounting for 19.8%, 17.1%, 14.3%, 11.9%, 9.1%, 8.7% and 8.3%. This not only shows that the current situation of shortage of sub components has been widely concerned by various application industries, but also reflects that the shortage problem covers a wide range of industries.

Table 3: the surveyed enterprises cover the whole industry of the electronic industry      Data source: survey on shortage of electronic components in 2021

Table 4: more than 45% of enterprises below 50 million are affected seriously by the "disaster"

4、 MCU and power IC are most out of stock. Passive components that are often out of stock in previous years have little impact this time

In the shortage tide in the previous two years, such as MLCC and PCB, they did not show a particularly prominent shortage situation this year. 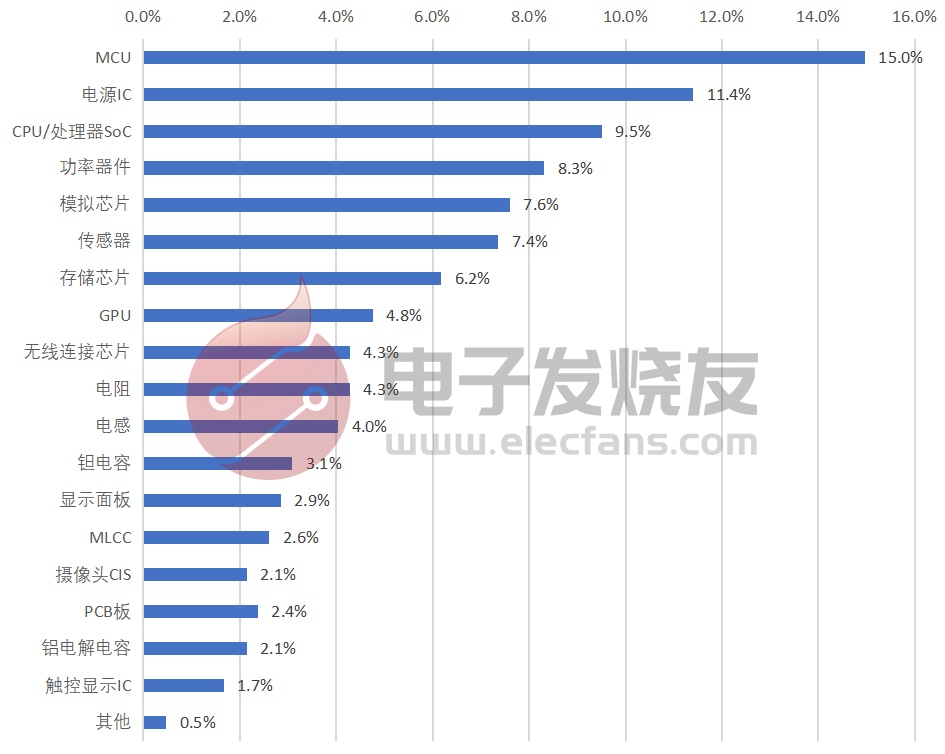 Table V: MCU, power supply and SOC are most out of stock      Data source: survey on shortage of electronic components in 2021

5、 The shortage has existed since last year, but it broke out in 2021

Generally speaking, the normal delivery time of MCU, power IC and power devices is 8 weeks. Obviously, from the research situation, the lengthening of delivery time has become a common phenomenon, and the proportion of delivery time exceeding 4 months and half a year has exceeded 45%. It can be seen that the whole delivery period is very serious.

Many companies have been out of stock for half a year or even more, but the slow response of the supply chain is related to the persistence of the epidemic and must be related to de intermediation in recent years.

Table 6: according to statistics, shortage broke out in recent two months in 2021

Six, the original shortage in the US and Taiwan China accounts for over 50% of the total, and the situation is not good.

According to the most influential problems in the supply chain, the US is the most Chinese mainland, followed by Taiwan, China, followed by Japan, China and Europe. The above are more than 10%. Among them, the proportion of the United States reached 39.3%, far higher than second of China's Taiwan accounted for 16.6%. The proportion of South Korea and Southeast Asia is relatively small.

7、 The continuous increase of orders and shortage coexist at the same time, and the situation is grim

For the loss caused by the shortage of electronic components, the most direct is "increased orders, but unable to deliver", accounting for 37.9%, indicating that many manufacturers are in the situation of waiting for rice; The selection of "high price, but affordable" accounts for 26.6%, indicating that some manufacturers are under the pressure of component price rise; "The price is too high and unbearable" accounted for 18.3%. It is worth noting that the proportion of up to 15.4% chose "reduced orders and insufficient construction". It can also be seen that some manufacturers can't get more orders due to factors such as lack of core.

Table 8: the continuous increase of orders and the failure to purchase and arrive at the same time exacerbate the shortage

8、 Finding alternative materials and new suppliers is the primary action in the short term, and the redesign scheme is the medium-term scheme

In the face of shortage and rising prices, the way to find alternative materials accounted for 39.2%, followed by looking for more suppliers, accounting for 24.2%, and redesign scheme reached 21.2%. These are the three countermeasures for manufacturers to face shortage. In addition, purchasing spot goods at high prices as a necessary measure ranked fourth. I'm afraid the worst is to shrink layoffs and strategic defense. This option also accounts for 2.7%. According to the survey, there are no enterprises that have closed due to shortage.

Out of stock enterprises look for alternative materials and more suppliers in the short term, which is a good market opportunity for domestic IC. Market reshuffle is inevitable. At present, the redesign plan is a medium-term response strategy, and there are no enterprises that have laid off or closed down. As the shortage continues, we will continue to pay attention to the development of the industry in the future.

Table 9: enterprises have taken different measures to deal with it, but they are still struggling for the time being without serious consequences

9、 The top three reasons for shortage belong to the global scope, which is difficult for Chinese enterprises to deal with alone

According to the survey data, the biggest reason for the shortage outbreak is still the impact of the epidemic, accounting for 25.5%; The lack of production capacity and material shortage are also very important factors. The first three reasons are global events, which cannot be solved in the short term by China alone.

In addition, the explosion of domestic demand side, including the demand growth of 5g and new energy vehicles, is also one of the causes.

In addition, artificial hoarding and strategic adjustment of chip manufacturers also exacerbated the centralized outbreak of shortage to some extent.

Table 10: the first three reasons are frustrating, and China can't solve them alone      Data source: survey on shortage of electronic components in 2021

10、 Shortage is pessimistic, and it is unlikely to be solved in the first half of 2021.

When asked when the shortage situation will be alleviated, it is considered that the mitigation time node accounts for only 6.6% in the first half of 2021. The industry is generally pessimistic about solving the shortage crisis in the near future.

According to the overall prediction, the shortage situation will continue in the first half of 2021. The third quarter began to ease, but the situation is clear. I'm afraid it will be 2022.

Once again verified the previous view of < electronic enthusiast Network >: This is a historical shortage, which is difficult to solve quickly.

Table 11: less than 10% of people think they can solve the shortage in the short term      Data source: survey on shortage of electronic components in 2021

In this survey, we have seen the most real voice of the market on the core issue of the current shortage and price rise of components.


How to solve it? Of course, it's hard. In a hurry, we put forward three suggestions for the time being:

Nowadays, the most lacking chips, such as MCU and power IC, are mostly concentrated in mature design schemes. Based on the original scheme, it seems that they can't get the chip. In the process of selecting the redesign scheme, it is suggested that some chips with newer brands can be selected. They may not come from mainstream suppliers, but they also have certain strength, And there is no shortage of such chips. For example, the MCU most used abroad is stmicrochippress. Obviously, they have the most previous schemes, the greatest demand and the most serious shortage. However, there are some brands that are relatively unpopular and difficult to promote. During the interview, the author learned that their previous MCU was more prepared as a standard product, and now they still have inventory in hand. If R & D engineers are not particularly busy with new cases, why not consider a new MCU to make a plan?


The second is to consider using domestic materials. Taking MCU as an example, there are several new MCU in China, including wafer partners and their own supporting peripheral devices. On the whole, it is difficult to supply and design. Once the cooperation begins, the security of the supply chain is more guaranteed than that of foreign countries.

Third, as a media that has long served the electronic design and manufacturing industry, it still calls for calm public opinion. The epidemic situation, materials and production capacity are all very global issues. It is impractical to completely localize in the short term. The electronic industry is the industry with the highest scientific and technological content and has always been the division of labor and cooperation of globalization. As the largest application manufacturing base, China should not expect to solve the problem of supply chain in China like producing clothes, hats, shoes or crops. The supply chain problem of electronic manufacturing and the cooperation with foreign enterprises have been the mainstream for a long time. Arbitrarily advocating the view of comprehensive substitution can not solve the problem.


Disclaimer: This article comes from the InternetReprinted from“Electronic enthusiast network”, support the protection of intellectual property rights. Please indicate the original source and author for reprint. If there is infringement, please contact us for deletion.