With the rapid development of mobile Internet and the popularization and application of intelligent terminal equipment, people put forward greater requirements for the rate of mobile communication. The fifth generation mobile communication system (5g) aims to provide a peak rate of 10Gbps ~ 20gbps and a user experience rate of 100Mbps ~ 1Gbps to meet richer business needs. 5g can be widely used in densely populated areas because of its large wireless communication service capacity, many services and high speed. However, it is difficult to give full play to its advantages in sparsely populated areas or areas where it is difficult to lay ground networks. Compared with the ground mobile communication network, the satellite communication system mainly has incomparable advantages such as wide coverage, large communication capacity, small terrain impact, high flexibility and can adapt to a variety of services. Therefore, the satellite can be used to cover sparsely populated areas or areas where it is difficult to lay the ground network, forming a good complementarity with the ground network, so as to realize the real global coverage, Provide undifferentiated communication services for global users.

With the increasing maturity of 5g technology, the integration of 5g and satellite has attracted extensive attention at home and abroad. Standardization organizations such as the International Telecommunication Union (ITU) and the Third Generation Partnership Program (3GPP) have invested a lot of energy in the technical demonstration of satellite integrated 5g system.

1) In 2016, the International Telecommunication Union proposed that "the next generation mobile communication network should meet the demand that users can access services anytime and anywhere", and launched itu-rm. [NGAT] in the field of satellite access technology_ For the research of SAT standard, four typical application scenarios are proposed for satellite ground integration, including relay broadband transmission service, data return and distribution service, broadband mobile communication service and hybrid multimedia service, as shown in the figure below, and the key characteristics to support the above applications are defined. In addition, ITU also actively promoted the work on the frequency use of satellite and 5g, and carried out a series of spectrum sharing and electromagnetic compatibility analysis between satellite and 5g. 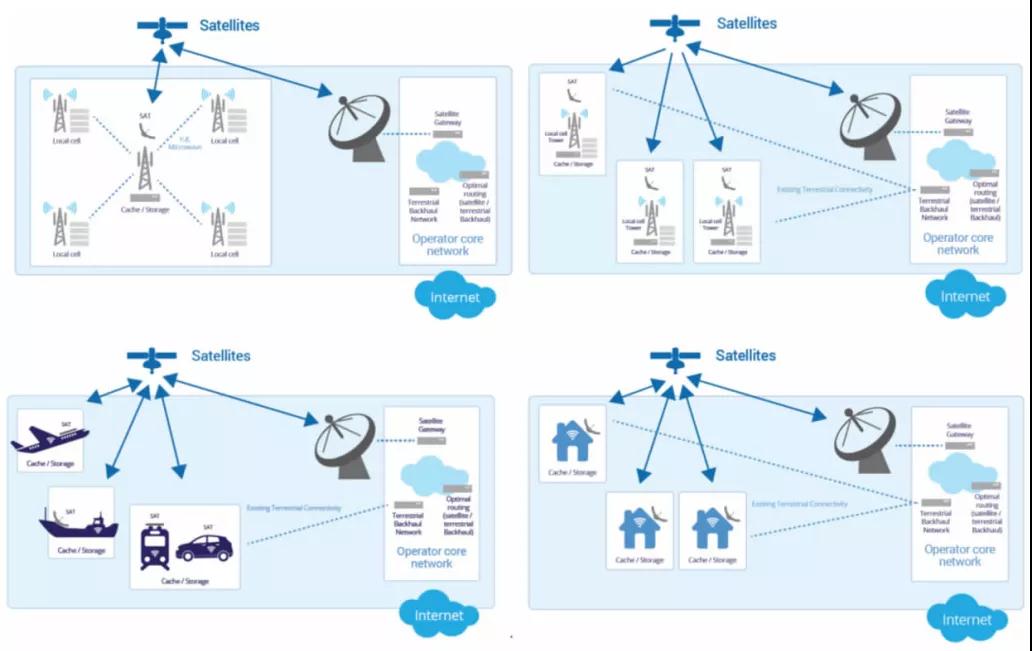 2) The Third Generation Partnership Program (3GPP) has demonstrated the advantages of satellite communication to ground mobile communication system since the release 14 Standard in 2017. In the technical report tr22.822 released at the end of 2017, 3GPP working group SA1 defined three major technologies for using satellite access in 5g: continuous service, ubiquitous service and extended serviceUse cases, and discusses the requirements of new and existing services. At present, 3GPP mainly relies on the research project called "non ground network (NTN)" to carry out research on the deployment scenario and air interface design of satellite communication in 5g.

3) In June 2017, sat5g (satellite and terrestrial network for 5g) alliance was established in Europe. Its members include BT, SES, Avanti, University of Surrey and other European enterprises and research institutions, aiming to provide 5g with a cost-effective, plug and play satellite solution and provide sustained growth market opportunities for the satellite industry chain. The 2018 European network and communication conference was held in Ljubljana, Slovenia. At the conference, five sat5g members demonstrated the integration of satellite and 3GPP network architecture, including VT IDI rect and SES. 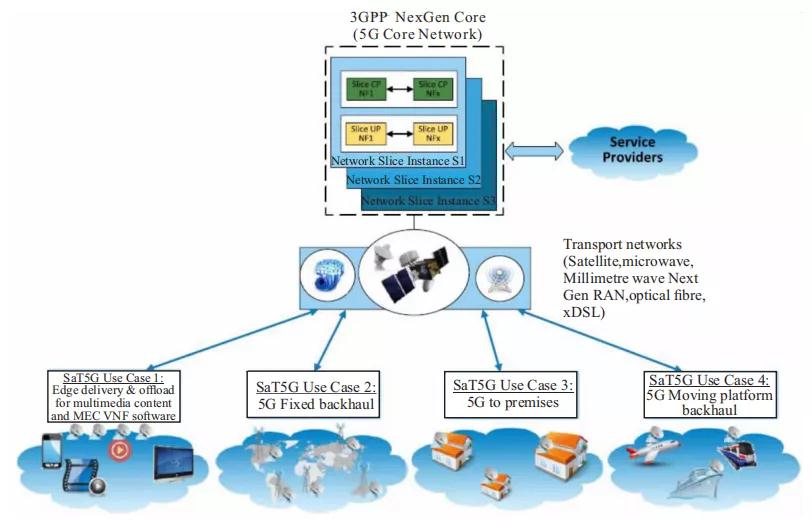 Due to the differences between satellite communication and ground wireless communication in propagation distance, coverage and power capability, realizing the deep integration of the two faces some inevitable challenges. The following analyzes the key technologies of satellite 5g integration from five aspects: architecture, beam coverage, air interface waveform, spectrum sharing and network control.

The inter satellite chain of LEO satellite constellation is composed of laser or microwave links, and multiple satellites are interconnected to form a space communication network with satellites as switching nodes. The constellation is usually designed by polar orbit constellation, because there is a relatively stable relative position relationship between satellites on adjacent orbital planes (except polar region or reverse slot), which is conducive to maintaining inter satellite links and realizing high latitude coverage. In addition, the satellite feed link service is landing at the gateway station, which realizes the interconnection between the satellite network and ground PSTN, PLMN and the Internet. These operations are realized in Ka or Q / V frequency bands.

In the satellite ground integrated mobile communication system, by adjusting its point beam and wireless resources, it provides voice and data services exceeding the predetermined capacity for hot spots. This flexible function is realized by digital beamforming (DBF) technology. At present, the digital beamforming technology of satellite communication mainly includes ground DBF, spaceborne DBF and hybrid DBF. Among them, hybrid digital beamforming has a good compromise between performance and complexity, and has been widely studied. When hybrid DBF is adopted, the ground network control center calculates the optimized beamforming matrix according to the beam adjustment requirements and corresponding strategies, and then sends the parameters of the beamforming matrix to the satellite through the feed link. Through the reconstruction of multi beam antenna on the satellite, the beam coverage to the ground is dynamically adjusted.

There are two main types of handoff caused by satellite or terminal mobility: one is the handoff within the satellite system. For LEO satellites, their relative ground position changes rapidly, so that the terminal is continuously covered by the same satellite for only more than ten minutes. Therefore, in order to prevent data loss during switching, inter satellite or inter beam switching must be prepared in advance and implemented quickly. The other is the switching of the terminal between the ground 5g network and the satellite network. This handover needs to consider supporting on-board processing and transparent forwarding architecture, time synchronization, measurement and information coordination. When the cellular network signal is very weak, the terminal will switch from the cellular network to the satellite network, otherwise it will maintain the access of the ground network.

Orthogonal frequency division multiplexing (OFDM) is still the basic transmission system of 5g system, but the inter carrier interference (ICI) will seriously degrade the system performance. This is because the orthogonal frequency division multiplexing technology is very sensitive to frequency offset, and the crosstalk between subcarriers caused by frequency offset will degrade the communication performance. In order to effectively resist the influence of residual frequency offset on system performance, the design scheme of variable subcarrier bandwidth can be adopted. For L-band with narrow frequency band, since the code rate of voice service supported by it is as low as 2.4kbps, 15KHz or narrower subcarrier design shall be adopted. In Ka band, the subcarrier width that can be used is large. This is because users often surf the Internet with broadband and the minimum elevation angle is large, which can effectively reduce the influence of Doppler effect.

In addition, non orthogonal multiple access (noma) supported by 5g does not require each user to monopolize resources. Users can send and receive information on non orthogonal resources at the same time. Based on multi-user joint detection, mutual interference between users can be avoided by means of signal processing. Compared with the traditional orthogonal access method, the application of noma technology can improve the spectral efficiency by more than three times. At present, noma chip for ground 5g system has been developed and popularized. Noma technology uses complexity in exchange for spectral efficiency, which also means that it will be difficult to apply to long time-delay geostationary orbit (GEO) satellite communication scenarios, because a large number of signaling interactions are used to dynamically control user access parameters. Subsequently, technical research shall be carried out on noma technology in satellite communication.

2) 3ghz-6ghz C-band: many countries have proposed to use C-band as a candidate band for 5g system, including China, EU, Japan and South Korea. However, in Asia, China, Vietnam, Malaysia and other countries have built a large number of satellite communication systems in this frequency band, and it is difficult to coordinate the use of C frequency band for ground 5g system.

When the satellite communication system is deeply integrated with the ground 5g, the control function and forwarding function of the satellite core network can be separated to further simplify the forwarding function. In order to support the transmission requirements of high traffic and flexible and balanced traffic load scheduling, the service storage and computing capacity can be moved down from the network center to the network edge.

In order to support integration with the ground, in addition to the nine network functions of 3GPP providing basic service functions, non-3GPP interconnection functions and user plane functions need to be added to the user plane of 5g satellite core network.

2) Challenges of access and resource management: considering the long delay of satellite ground integrated network, it brings challenges to the access control, HARQ, ARQ and other processes of MAC layer and RLC layer. In terms of access control, in order to support the effective integration of 5g and satellite, it is necessary to design reasonable access mechanisms such as pre authorization, semi continuous scheduling and authorization free. For HARQ, the round-trip time usually exceeds the maximum timer length of HARQ. HARQ process has strict requirements on time. In the scheduling process of MAC layer and RLC layer, the long delay of satellite system will also affect the timeliness of scheduling, so its scheduling delay parameters need to be adjusted.

This article is reproduced from“ Satellite and network”, support the protection of intellectual property rights. Please indicate the original source and author for reprint. If there is infringement, please contact us to delete

Prev：In addition to providing navigation, positioning and timing services, what else can satellite navigation do?
Next：[blockbuster release] top ten developments in the field of world communication and network in 2020