Events
Home -Events -Industry News -In March, the global components were in short supply, and the models were large!

In March, the global components were in short supply, and the models were large!

The global chip shortage is becoming more and more intense, and the superposition of sudden natural disasters has strained the nerves of the electronics industry. Consumers are also faced with rising prices and shortages of televisions, mobile phones, cars and game consoles.

Automotive, Netcom and storage industries are most in short supply of chips

Automotive Industry:From the original factory shutdown caused by the cold wave in Texas to the recent fire in Renesas, it is very difficult for large automobile chip manufacturers this year. 66% of Renesas's production capacity is automotive chips, which also leads to the soaring of auto chips of Renesas, NXP and Ti again. In addition, the affected factory is also the OEM of AKM. At present, AKM OEM is not affected, but AKM inquiry has also increased due to the fire.

Storage industry:The market is still crazy. Samsung's shortage and price rise are the highest. The delivery date of some products of micron and Winbond has exceeded 22 weeks, and DDR3 2GB is still the most scarce material.

At present, the popular chips in these three industries are almost in 0 inventory status on DigiKey, MAOZe, Fuchang and other websites:


Although the passive components are not affected by the large shortage, the prices of major manufacturers have increased continuously and the delivery time is also being extended. In the following April, the contract price of polymer tantalum capacitors under Guoju will be increased by 10% to 20% for European and American customers, which also means that all major product lines of Guoju will be increased in an all-round way; Samsung will raise MLCC prices for medium-sized contract customers by an average of 10%. The lower the profit, the greater the adjustment.    The price adjustment of major passive component manufacturers is as follows: 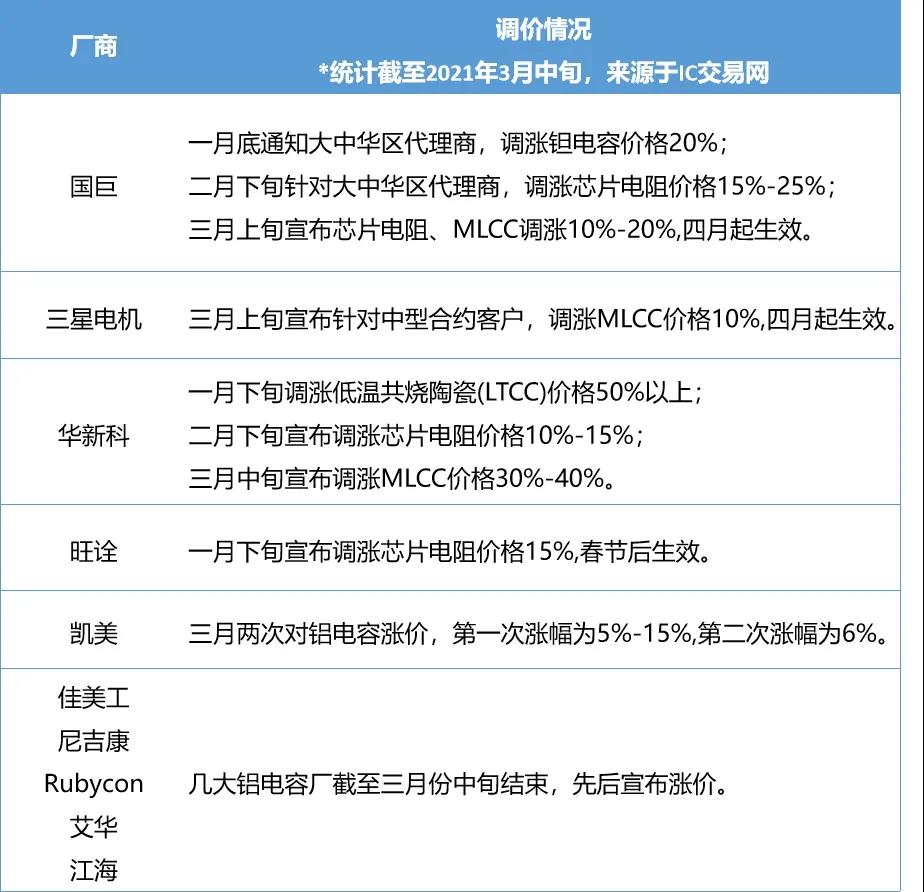 Security chip increased by more than 40

Although the added value of security chips is not high compared with vehicle and mobile phone chips, it is also difficult to escape the impact of "lack of core", especially affected by the shortage of storage chips and main control chips.

At present, the delivery cycle of security products has been generally extended by about half a month, the delivery period of some products has been extended to nine months, and the security camera has increased by about 40%.Many security enterprises are looking for new chip manufacturers. It is predicted that the shortage of security chips will continue in the short term, which is also a market field worthy of attention.