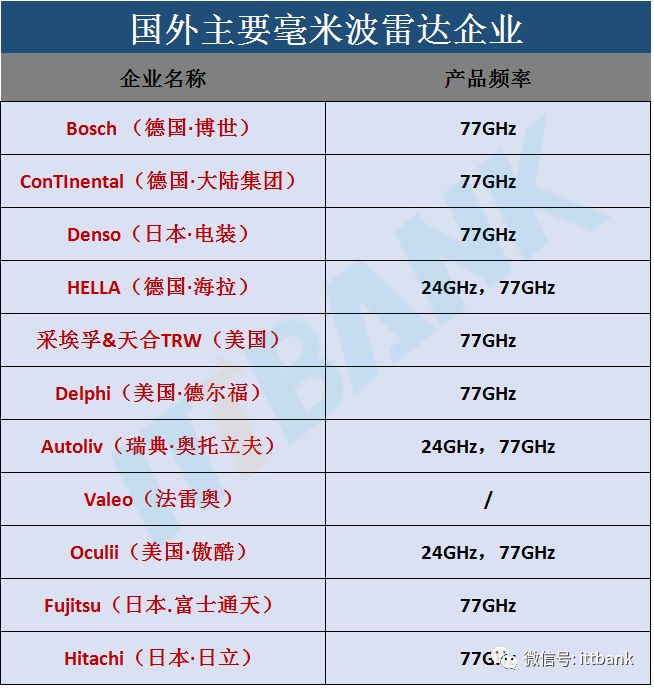 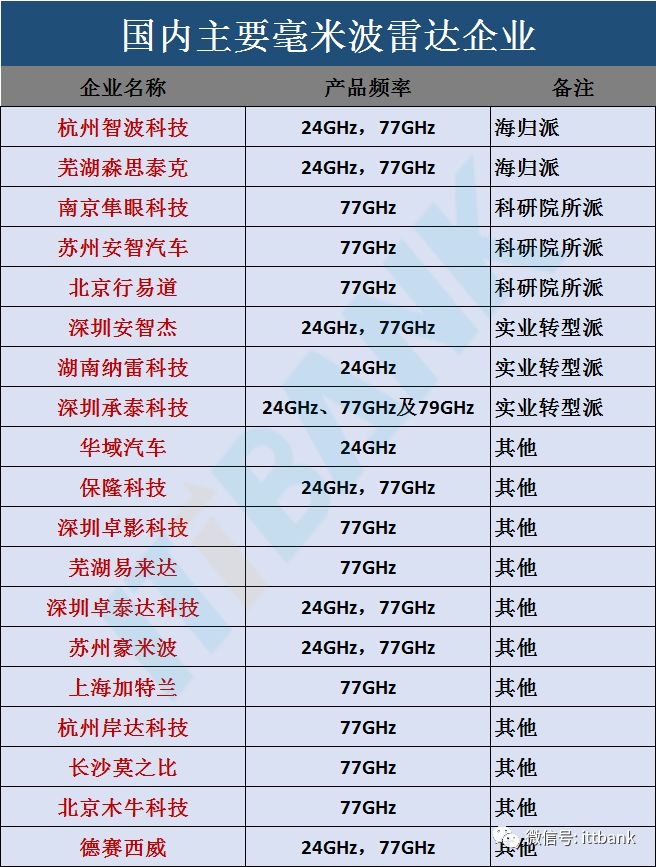 1、 What is millimeter wave radar 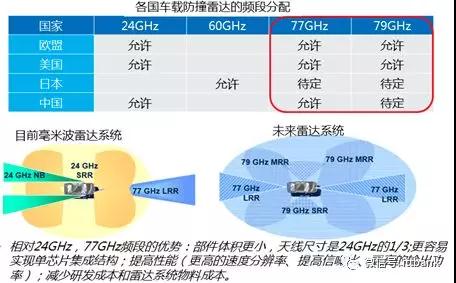 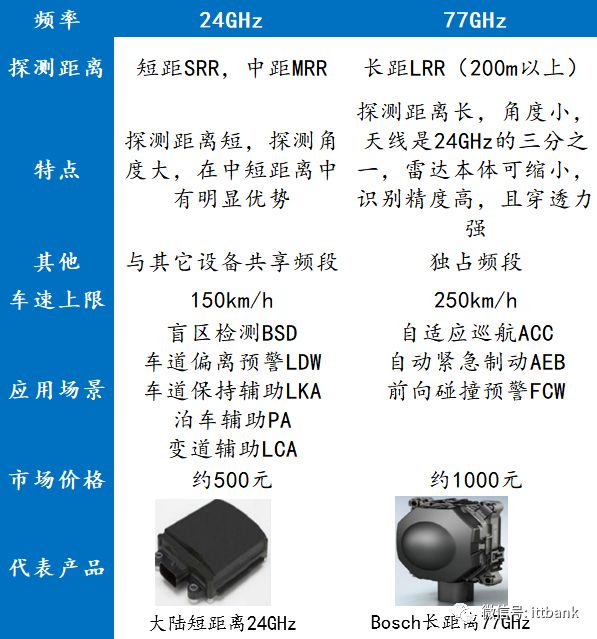 ▲Comparison of millimeter wave radar at 24GHz and 77GHz


The on-board millimeter wave radar transmits millimeter wave outward through the antenna, receives the target reflection signal, quickly and accurately obtains the physical environment information around the vehicle body (such as the relative distance, relative speed, angle, motion direction, etc.) after rear processing, and then tracks, identifies and classifies the target according to the detected object information, Then the data fusion is carried out in combination with the dynamic information of the vehicle body, and finally the intelligent processing is carried out through the central processing unit (ECU). After reasonable decision-making, inform or warn the driver in various ways such as sound, light and touch, or make active intervention in time, so as to ensure the safety and comfort of the driving process and reduce the probability of accidents. 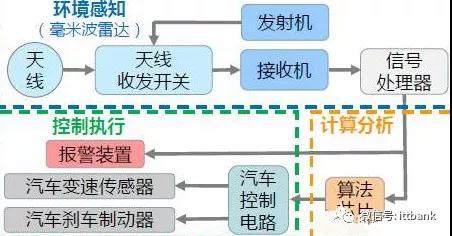 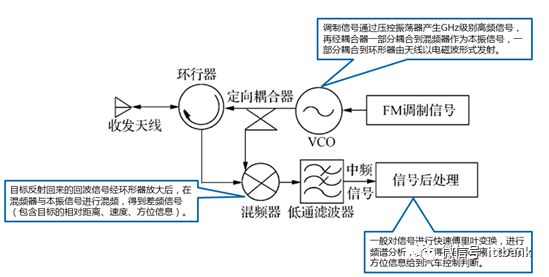 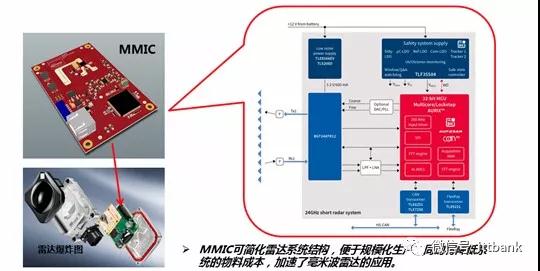 The domestic millimeter wave radar chip industry has not yet formed a scale.Millimeter wave chip is a highly difficult project involving a wide range of disciplines. Domestic enterprises still have a certain gap with large foreign companies in the following two aspects:

● the accumulation of chip core technology is small, and the innovative application is basically led by foreign giants;

With the acceleration of China's integrated circuit industrialization, domestic chip design enterprises have begun to layout the field of millimeter wave radar.

Tsinghua University, qingneng Huabo and other units have profound accumulation in the field of millimeter wave radar chips. The millimeter wave State Key Laboratory of Southeast University has completed the development of 8mm band mixer, frequency multiplier, switch, amplifier and other single-function chips. At present, the design and development of single-chip receiving / transmitting front-end is being carried out;The key technologies of 24GHz / 77GHz MMIC in China are also constantly making breakthroughs. Among them, the 24GHz SiGe radar RF front-end MMIC chip set independently developed by Yixing semiconductor has taken the lead in achieving a zero breakthrough in this field in China, and has now achieved mass production and supply.The year before last, Gartland microelectronics released its first 77GHz CMOS vehicle millimeter wave radar transceiver chip in China.Nanjing Miller is also developing radar MMIC.

Antenna is one of the key designs of automotive millimeter wave radar, and it is also the key to win the market. The mainstream scheme of millimeter wave radar antenna is microstrip array. In short, the high-frequency PCB board is integrated on the ordinary PCB substrate to realize the function of the antenna. It is necessary to maintain sufficient signal strength of the antenna in a small integration space. 77GHz radar is a high-frequency PCB board with higher specifications. The large-scale application of 77GHz radar will bring huge demand for corresponding high-frequency PCB boards. For example, Bosch's lrr3 requires several GaAs chips to generate, amplify and detect 77GHz microwaves compared with the second generation LRR. Bosch's third generation LRR greatly simplifies the radar antenna PCB and uses only one or two Infineon SiGe chips.

Because the functions of ADAS are often bundled and sold through sensor processors, system suppliers play a core role in the industrial chain. ADAS technology based on millimeter wave radar is mainly monopolized by giants of traditional parts system suppliers such as mainland China, Bosch, electrical equipment and Autoliv. Domestic high-frequency PCB manufacturers have no technical reserves and can only process according to the drawings, and the components still need to be imported from abroad. Hudian Co., Ltd. is a plate supplier of the mainland and Bosch. At present, it has cooperated with Schweizer, an international top manufacturer, on PCB products for 24GHz and 77GHz high-frequency radar.

At present, the high-frequency PCB board of radar antenna is controlled by a few companies such as Hudian, Rogers, Isola and Schweizer (Schwartz, currently Hudian holds 19.74% equity of the company).Domestic high-frequency PCB manufacturers have no technical reserves, can only process according to the drawings, and still need to be imported from abroad.Shanghai Electric Power Co., Ltd. in China is a PCB plate supplier in mainland China and Bosch.

3. Distribution of major suppliers of millimeter wave radar in the world 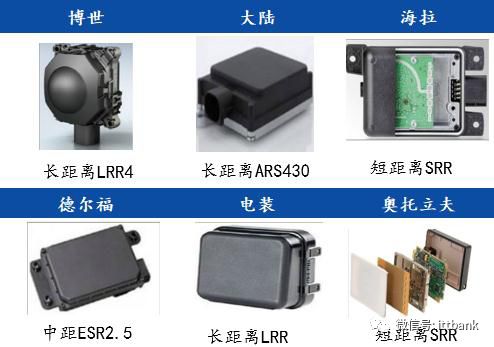 Domestic: Domestic enterprises are accelerating to catch up, and 24GHz is still the mainstream direction 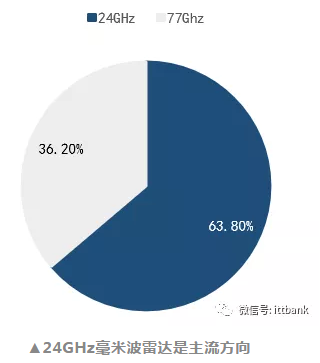 At present, the product system of 24GHz millimeter wave radar in the domestic market has been relatively mature, and the supply chain has been relatively stable. 24GHz core chip RF chips can be obtained from chip suppliers such as Infineon and Freescale.

However, at present, there is no stable supply system for 77GHz millimeter wave radar chips worldwide. Due to relevant intellectual property rights and cooperation agreements, Infineon, Freescale, Italy France semiconductor and other chip manufacturers have not liberalized the supply of 77GHz radar chips to China. Therefore, the development of 77GHz millimeter wave radar in China is limited. 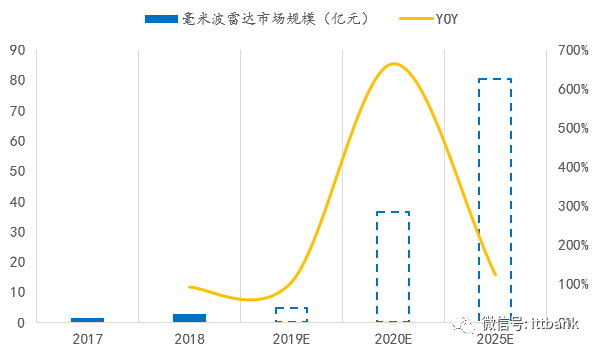 
This article is reproduced from“ittbank”, support the protection of intellectual property rights. Please indicate the original source and author for reprint. If there is infringement, please contact us to delete