There are two main reasons why the USB type interface of golden navigation mark charges fast. One is that the type interface developed by golden navigation mark kinghelm has four power lines. The power line is thick and the allowable current is large. Of course, the charging is fast; Second,typecDuring interface charging, the charger is allowed to communicate with the mobile phone power management chip to improve the charging voltage. When the current remains unchanged, the charging power can be increased, which is much faster. Theoretically, the maximum speed can reach 100W.

1. Typec interface pin definition a few years ago, the most commonly used is the micro USB interface, that is, the charging and data transmission interface used by Android phones. This interface has only five pins. In fact, it only uses four of them, two power supplies and two data. When charging, the contact area between the pin and the mobile phone is very small, and the maximum current allowed is very limited, generally the maximum is 2A. If it is larger, the interface contact will be overheated and burned, resulting in danger. Later, the USB type C interface with obvious advantages and leading technology appeared to replace the micro USB interface. USB typec has 24 pins at most, and the front and back sides are symmetrical. As can be seen from the figure, there are four negative power supply pins and four positive power supply pins (VBUS).

2、Typec interfaceThe technical specifications are not only because there are too many power pins (equivalent to the thick power cord), but also for technical reasons. From the above interface, we can see that there are two CC pins. This pin is communicated between the charger and the mobile phone power chip. Through negotiation, the power chip will notify the charger of the fast charging protocol it receives. After receiving, the charger will increase the charging voltage. In this way, the charging power can be greatly improved under the condition of constant current. 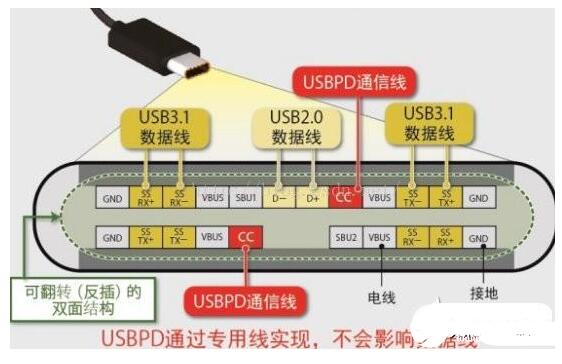 To sum up, there are two reasons for the fast charging of the type interface. First, the charging lines are thick (multiple lines are connected in parallel) during charging, allowing a large amount of current; Second, the type ctypec interface has a communication port, which can increase the charging voltage after negotiation with the mobile phone, so as to improve the charging power and speed up the charging (this is super fast charging).