Events
Home -Events -Industry News -Why is the 700m of radio and television called the golden band?

Why is the 700m of radio and television called the golden band?

In China, any frequency band is less than 700m.

It is called mobile communication「Golden band」, it has triggered countless topics in the 4G era.

700m, how can it have such a good reputation and carry so many expectations?

In the 5g era, China Radio and television officially entered the bureau with 700m, becoming the fourth mobile operator.

Is this new player holding a heavy weapon unknown and following suit, or does he have distinctive characteristics and take the edge of the sword?

More than 130 years ago, with the flicker of the low light of the electric spark on the Hertz experimental platform, mankind knocked on the door of the electromagnetic wave. Since then, this invisible and untouchable mysterious substance began to be tamed by humans.

Electromagnetic wave propagates in the form of sine wave in space. Here, a simple and magical formula should be introduced:

λ: is the wavelength, which is the distance that the electromagnetic wave can propagate in a period.

lowerFigure is 5g definitionFR1 ranges from 410mhz to 7125mhz. In fact, the mainstream spectrum used by 4G is between 700MHz and 3500MHz. 5g continues to expand to high frequency band and large bandwidth while inheriting 4G spectrum. 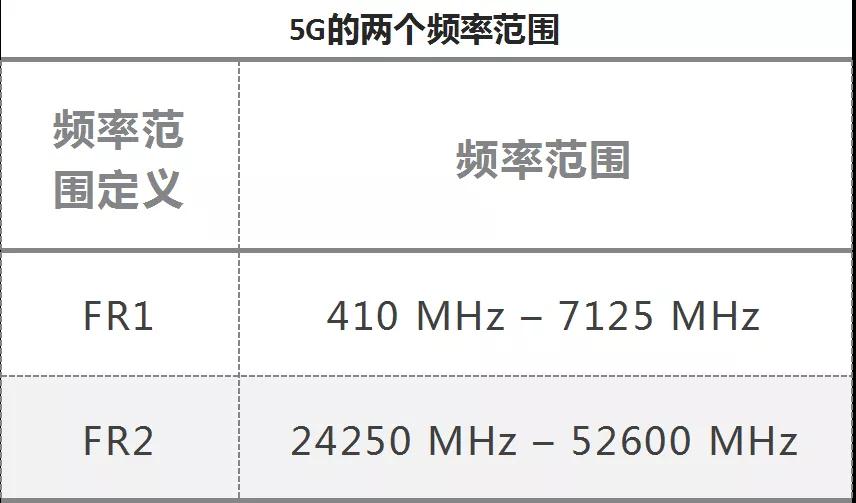 The higher the frequency, the greater the available spectrum bandwidth and the higher the peak rate that can be provided. This meets the demand of 5g ultra-high download rate, but the disadvantage of higher frequency band can not be ignored.

That is, the higher the frequency, the shorter the wavelength, and the more it tends to propagate in a straight line. The greater the propagation loss in a complex environment, the worse the refraction and diffraction ability. Our most intuitive feeling about this is our poor ability to penetrate the wall.

For example, WiFi signals and lights are electromagnetic waves, and the frequencies of WiFi signals are 2.4GHz and 5GHz. We can also discuss whether the home router can penetrate one wall or two walls; The frequency of visible light is very high, which is more than 100000 times the frequency of WiFi, so it can't wear walls or even paper. 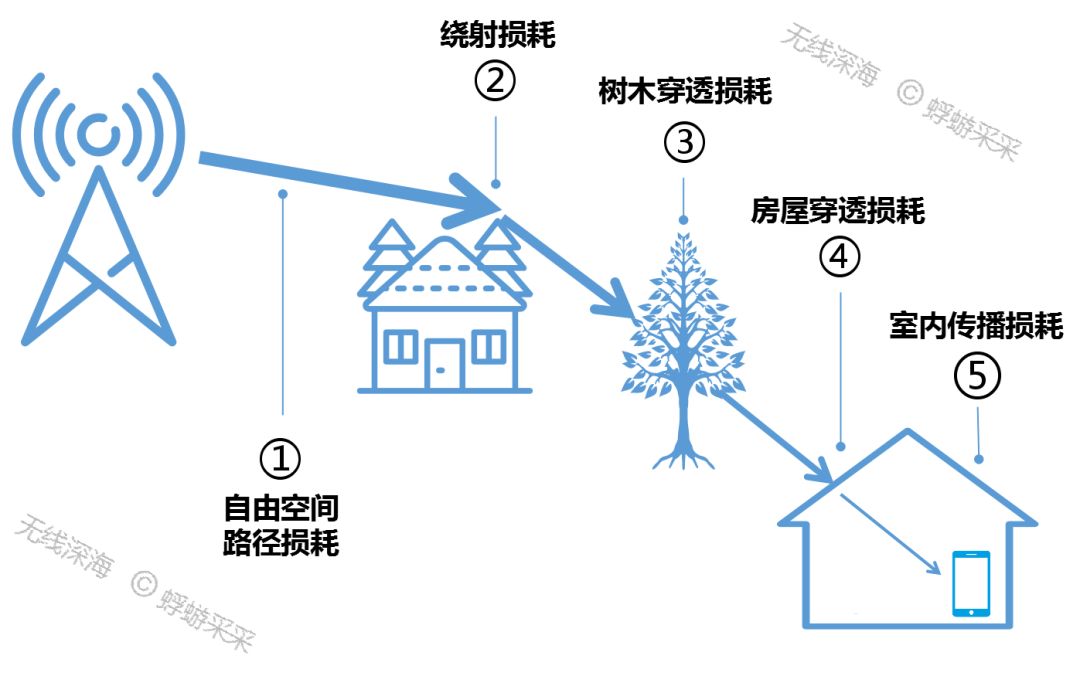 Moreover, the signal frequency is high, which is even more difficult for indoor coverage.

It is the most widely used low frequency band in mobile communication (less than 1GHz, also known as sub1g), with small propagation loss and strong coverage.

By the end of 2020, China Mobile has built about 350000 5g base stations, which has basically realized the coverage of most prefecture level cities. However, more base stations are needed to cover the vast counties and suburbs.

The 5g spectrum used by China Mobile is 2.6GHz, slightly higher than the 4G spectrum. At present, China Mobile has a total of 3.15 million 4G base stations in China. In order to achieve 4G coverage, it is conceivable that the number of new base stations needs to be built.

It can be seen that the coverage advantage of 700m band is very huge, which is what it is called"Gold band"The reason for this.

The so-called success and failure are also Xiaohe. The shortcomings and advantages of 700m are mutually causal and inseparable.

Since the frequency of 700m is low, the wavelength is relatively large, resulting in the size of antenna oscillator required for signal transmission or reception. However, the area of the antenna is limited, and naturally there is no room for too many oscillators.

As a result, the core technology of 5g - massive MIMO has basically no chance with 700m.

At present, the mainstream 5g products in the commercial 2600m or 3500m frequency band are 192 oscillators64 daysLineThe 700m can only use the previous RRU form and 4-port antenna.

Moreover, the available bandwidth of 700m is also higher than that of hundreds of megabytesthree hundred and fifty0MFrequency bandMuch smaller, which makes the problem of insufficient capacity worse.

That is to say, 700m is from the perspective of coverage"Gold band", but it is short in capacity.

In fact, in the 4G era, 3GPP defined a series of frequency band lists, including 700m.

In fact, due to the large bandwidth and good coverage of Asia Pacific 700, it has been widely used in the 4G era. The scope is not limited to the Asia Pacific region, as long as this frequency band is available in a country and supported by mobile phones.

In the 4G era, the maximum carrier bandwidth is 20m, but in order to pursue ultra-high speed, the larger the channel bandwidth, the better.

How much carrier bandwidth should the protocol define for n28? First of all, it must not exceed the maximum range of 45m. Secondly, whoever needs it will raise his voice to propose to 3GPP.

Therefore, China Radio and television cheered: this frequency band is exclusive to me, so I expect to use it as 5g with large bandwidth and support 30mAnd 40m bandwidth is required!

The reason for this proposal was very strong, and 3GPP accepted it.

Not only the uplink and downlink frequency bands are different, but also the bandwidth can be different.

The base station can use the maximum 40m bandwidth, but the mobile phone can only use 30m bandwidth at most, and the 30m bandwidth has been determined: 703-733mhz or 718-748mhz. You can choose.

Although the Ministry of industry and information technology has issued a document to 703-743 / 758-798mhz(up and down)Each linefortyM bandwidth）It is used for 4G and 5g, but at present, radio and television still uses 30m for uplink and downlink, and 30m for uplink703-733MHz, the downlink is758-788MHz。 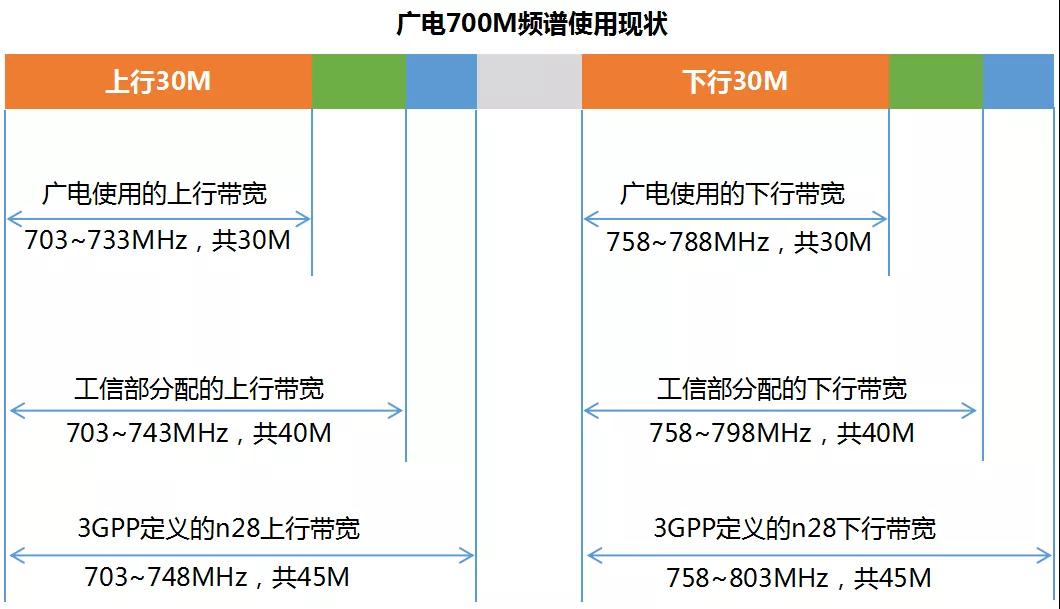 This is it."High and low frequency networking"。

At present, in addition to 700m, radio and television also has 60MHz bandwidth on 4.9g. The two frequency bands are one low and one high, one FDD and one TDD. Isn't it beautiful to take both uplink and downlink into account?

At that time, China Unicom and telecom had decided to build and share 5g, so they had 200m band at 3.5GHzWide, plus 45m bandwidth at 2.1GHz, it is also a combination of high and low frequency, FDD and TDD, which not only has wide frequency band, but also has good coverage.

Now China Mobile is a little flustered. I have 160m bandwidth at 2.6GHz, which is smaller than that of China Unicom at 3.5GHz. Although there is still 100m at 4.9ghz, the frequency band is high and the coverage is weak, so it does not have the upper hand in competition with China Unicom.

If only I could borrow the 700m of radio and television! As soon as the two talked, they hit it off and decided to build and share. 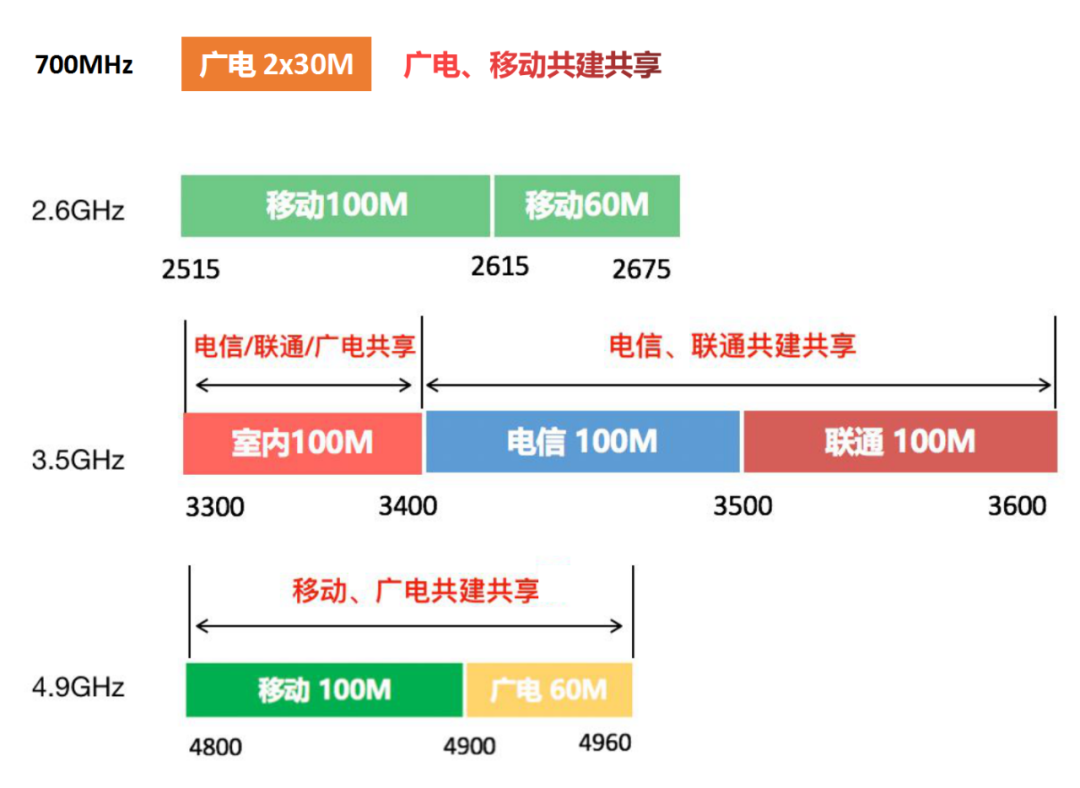 Radio and television has 700m "golden band""Plus 4.9ghz, the God's favorite with no shortage of frequency bands, why do you want to build and share 5g with mobile?

In fact, it's hard to think about radio and television, which started from scratch, although they hold heavy weapons in their hands: Everything starts from scratch with little experience; If the wireless network is built, the bearer must be built, and the cost is high; Small volume and weak driving force on the industrial chain; It's hard to say whether the revenue can maintain the operating cost after spending a lot of money to build the network.

With the support of China Mobile, the industry leader, everything is not a thing:

2. Transmission sharing: China Mobile's bearer network is very complete. If it can be borrowed, it will not only have low cost, but also quickly open 700m 5g.

3. Capacity sharing: Radio and television share 700m, which can not only improve the network coverage for China Mobile, but also enjoy the capacity advantage of mobile at 2.6GHz, take what they need and complement each other.

4. Reduce costs: building a 700m network with an investment ratio of 1:1 can alleviate the financial pressure of radio and television and realize low-cost and fast 5g network construction.

5. Industrial pull: as the largest operator in the world, China Mobile can quickly promote the maturity of 700m industrial chain and grasp the 5g construction window and the opportunity of the times.

In addition, China MobileandThe 4.9ghz band of radio and television is also close to each other. It can also be jointly built and shared. It's a natural match.

4、 What are the advantages of radio and television 5g?

China's three traditional operators have been deeply cultivated for many years and have a large number of users. As a new player in the 5g era, radio and television can't compete with its predecessors if it only provides homogeneous services.

In fact, as early as the 3G era, 3GPP has supported multimedia broadcast multicast service (MBMS), which can realize functions similar to mobile TV. However, due to the complexity of the network and the need for content management, it has not been developed.

In the 4G era, the original MBMS has been upgraded to embms (enhancedmultimediabodyBroadcast multicast service）However, it still hasn't developed.

In the 5g era, a new 5g broadcast multicast service (nrmb) will be introduced into the R17 standard of 3GPP protocol, which is the business development goal of radio and television. 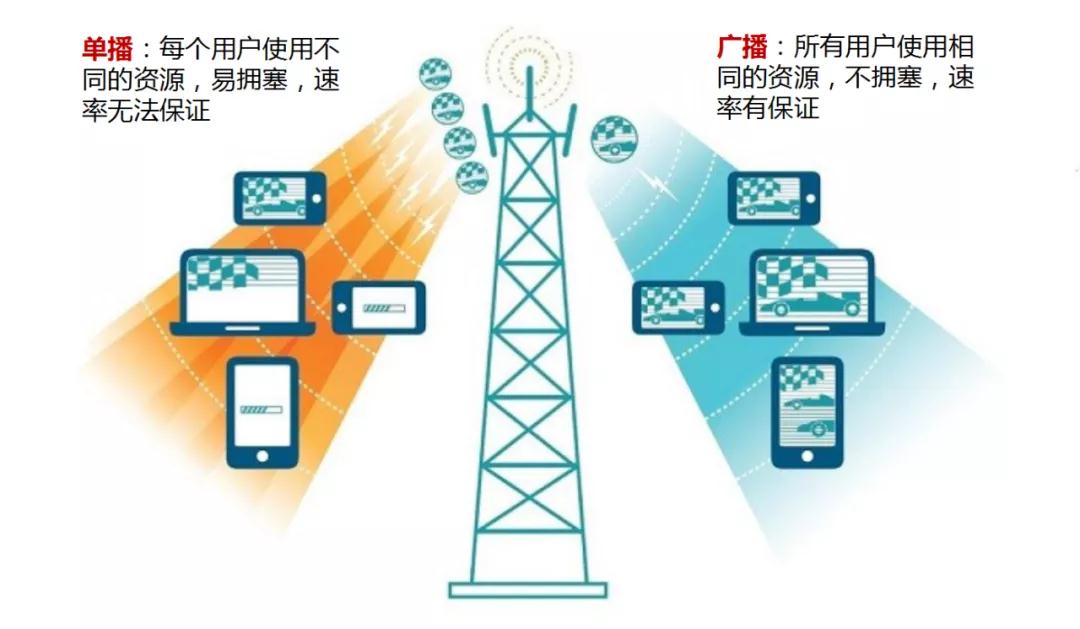 Moreover, the base station only needs one channel to send, and the number of users receiving broadcasting is not limited, which not only greatly saves network resources, but also realizes the effect of one transmission and multi-user charging.

Recently, Zeng Qingjun, deputy general manager of China Radio and television, said that the State Grid is committed to enabling every mobile phone to watch radio and television at the upcoming 2022 Winter Olympic Games. There is neither network congestion nor insufficient traffic!

All this looks so wonderful, let's wait and see!

Prev：4G antenna shall be designed with outstanding characteristics and stable performance
Next：How to release the potential of 100 billion 5g millimeter wave market?