Over the past 20 years, the standard has continuously promoted its development by introducing new protocols such as 802.11n, 802.11ac and 802.11ax (Wi Fi 6)。 The new standard supports higher-order modulation schemes, such as 64 QAM, 256 QAM and 1024 QAM. These new standards support simultaneous transmission of multiple data streams to a single client or multiple clients; In addition to increasing the peak data rate, efforts are also made to strengthen the spectral efficiency characterizing the utilization of the available spectrum by the system. In order to improve network efficiency and network capacity, multi-user technologies such as multi-user multiple input multiple output (MU-MIMO) and orthogonal frequency division multiple access (OFDMA) have been introduced. Once the Wi Fi (802.11) standard was released and implemented, the world began to change with the opening of the market and the emergence of new technologies. Each new standard is based on the previous standards and improved in speed and reliability. 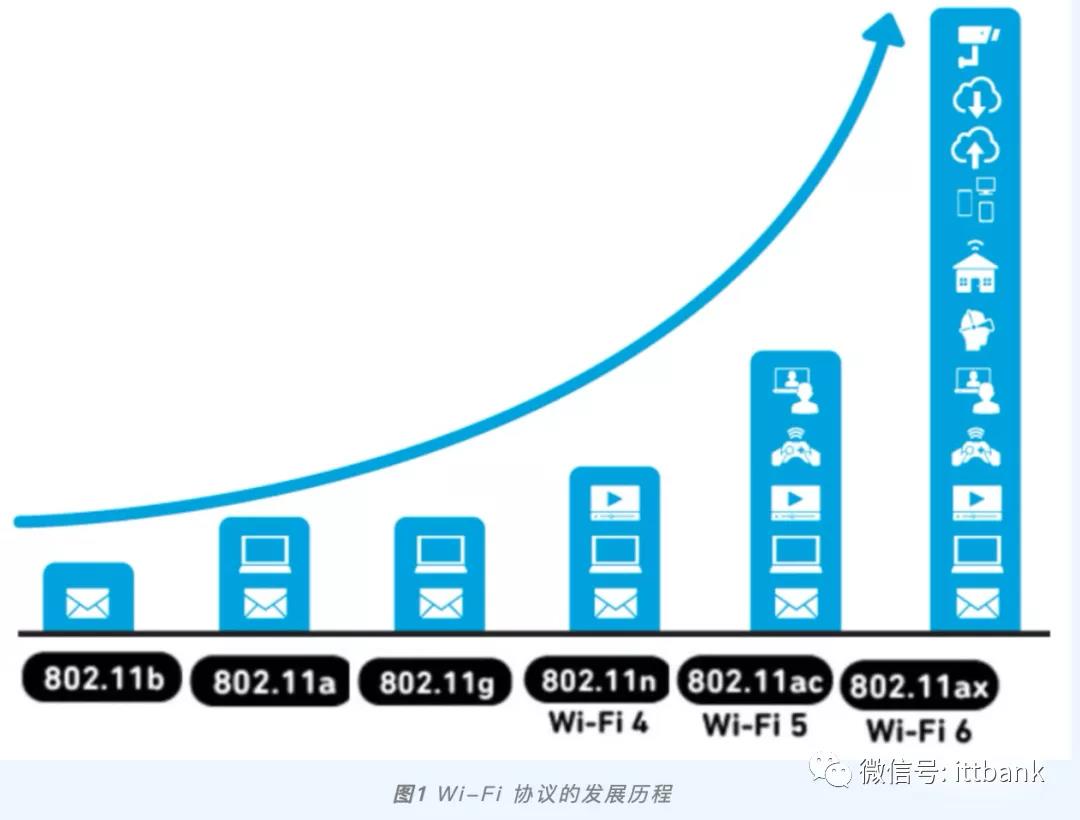 If you are looking for a new wireless network device or mobile device, too many choices and abbreviations will confuse you. Since the first release of Wi Fi to consumers in 1997, its standards have been evolving, usually leading to faster speed and higher network / spectrum efficiency. As more functions are added to the original 802.11 standard, its corresponding supplementary standards (802.11b, 802.11g, etc.) are also widely known. Table 1 lists the different criteria and the maximum theoretical data rates that can be achieved based on these criteria. Due to the influence of many factors, including signal attenuation with distance, modulation rate and forward error correction coding, bandwidth, MIMO multiplier, guard interval and typical error rate, the typical rate will be lower than the theoretical value. The 802.11 family consists of a series of half duplex air modulation technologies using the same basic protocol. In this article, we will discuss the basics of each Wi Fi standard. 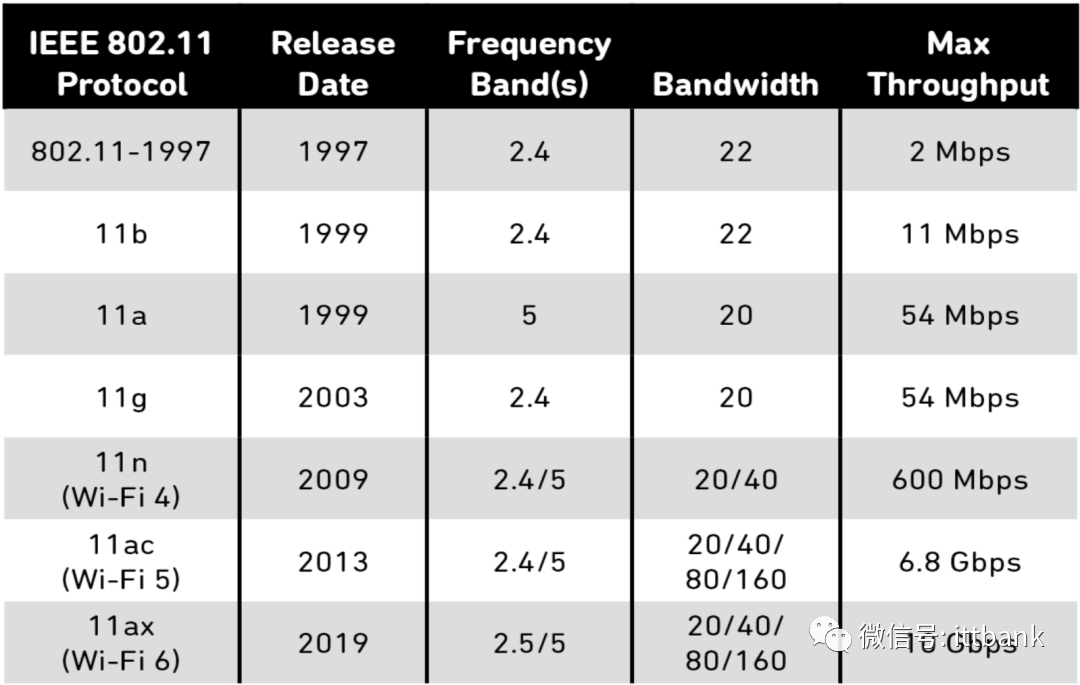 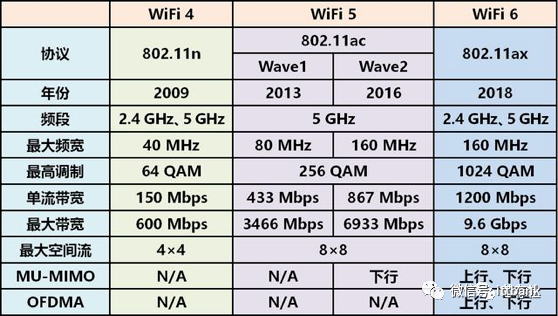 802.11-1997 is the first wireless standard in the series. It was released in 1997, but it is now obsolete. This standard defines the protocol and compatible interconnection of air data communication equipment in Carrier Sense Multiple Access Protocol (CSMA / CA) local area network (LAN) with collision avoidance function. The protocol supports three physical layer technologies, including infrared operating at 1 Mbps, frequency hopping spread spectrum (FHSS) supporting 1 Mbps and optional 2 Mbps data rate, and direct sequence spread spectrum (DSSS) supporting 1 / 2 Mbps data rate at the same time. The protocol is not widely accepted due to interoperability problems, cost and lack of sufficient throughput.

802.11b products were launched in mid-1999. Its maximum theoretical data rate is 11 Mbps and uses the same CSMA / Ca media access mode as defined in the original standard. 802.11b is widely accepted as a wireless technology because of the significant improvement of throughput and the significant reduction of price. 802.11b uses 2.4 ~ 2.5 GHz ISM unauthorized frequency band, which is a direct extension of DSSS, and uses complement keying (CCK) as its modulation technology. 802.11b is used for point-to-multipoint configuration, in which the access point communicates with mobile clients within the range of the access point.

This range depends on the RF environment, output power and receiver sensitivity. 802.11b has a channel bandwidth of 22 MHz and can operate at a rate of 11 Mbps, but will be reduced to 5.5 Mbps, then 2 Mbps, and 1 Mbps (adaptive rate selection) to reduce the replay rate caused by errors [1]. The 802.11b standard shares the same frequency bandwidth as other wireless standards. Therefore, wireless devices in the house, such as microwave ovens, Bluetooth devices and cordless phones, will interfere with Wi Fi.

802.11a adopts the same core protocol as the original standard, the operating frequency is 5 GHz, 52 subcarrier orthogonal frequency division multiplexing (OFDM) is used, and the maximum theoretical data rate is 54 Mbps, so as to realize the actual throughput of 20 Mbps. Other data rates supported include 6, 9, 12, 18, 24, 36 and 48 Mbps. 802.11a and 802.11b cannot interoperate because they operate in different unauthorized ism bands. In view of the increasing congestion of the 2.4 GHz band, the 5 GHz band adds significant advantages to 802.11a. However, due to the high carrier frequency, the overall effective range is less than 802.11b/g.

802.11a products were initially not widely accepted due to cost factors, small coverage and incompatibility with 802.11b. Among the 52 OFDM subcarriers, 48 are used for data, 4 are pilot subcarriers, and the carrier interval is 312.5 kHz. Each of these subcarriers can be BPSK, QPSK, 16 QAM or 64 QAM. The channel bandwidth is 20 MHz and the occupied bandwidth is 16.6 MHz; The symbol duration is 4 microseconds, including a protection interval of 0.8 microseconds. The advantages of OFDM include reducing multipath effect in reception and improving spectral efficiency [2]. Table 2 lists the different modulations supported by 11a and their respective theoretical data rates. 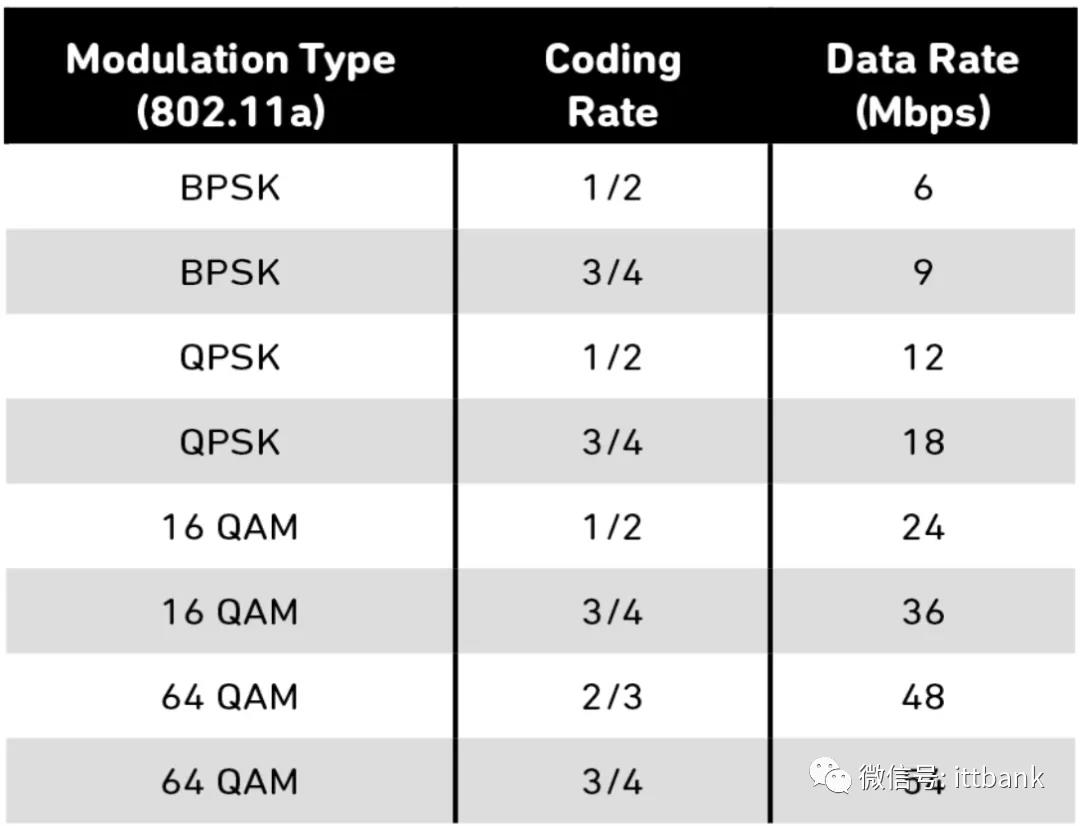 The introduction of 802.11n makes Wi Fi faster and more reliable; This progress is achieved by adding MIMO and 40 MHz channels to the physical layer (PHY) and frame aggregation to the MAC layer. MIMO is a method of using multiple transmit and receive antennas to utilize multipath propagation to multiply the capacity of wireless links. These antennas need to be spatially separated so that the signals from each transmitting antenna to each receiving antenna have different spatial characteristics, so that these streams can be separated into parallel independent channels on the receiver.

For channels operating at 40 MHz bandwidth, the width can be doubled and twice the PHY data rate can be obtained on a single 20 MHz channel. The 802.11n draft allows up to four spatial streams with a maximum theoretical throughput of 600 Mbps.

The 20 MHz channel has 56 OFDM subcarriers, of which 52 are used for data, 4 are pilots, and the carrier spacing is 312.5 kHz. Each of these subcarriers can be BPSK, QPSK, 16 QAM or 64 QAM. The total symbol duration is 3.6 or 4 microseconds, including a protection interval of 0.4 or 0.8 microseconds, respectively. Table 3 lists different modulation and coding schemes for a single data stream (for multiple data streams, the data rate is a multiple of the number of streams). 802.11n supports frame aggregation, in which multiple MAC service data units (MSDUs) or MAC protocol data units (mpdus) are packaged together to reduce overhead and average them to multiple frames to improve user level data rate. In addition, 802.11n is backward compatible with 802.11g, 11B, and 11a [3]. Qorvo has always been a leading supplier of 802.11n components, including power amplifiers, low-noise amplifiers, switches and integrated front-end modules (FEM). 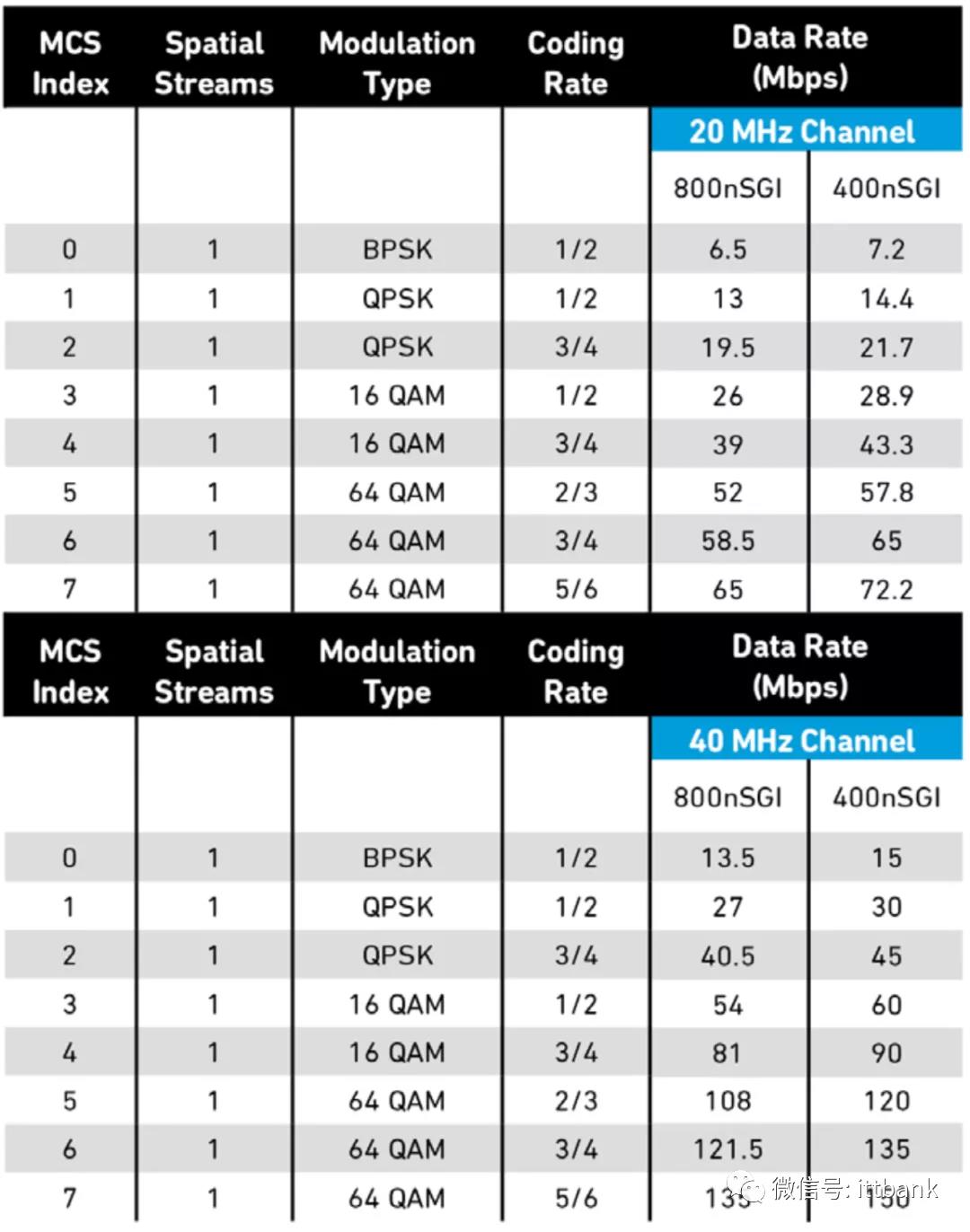 802.11ac speeds up Wi Fi by providing gigabits per second, which is realized by extending the 802.11n concept, including wider bandwidth (up to 160 MHz), more MIMO spatial streams (up to 8), downlink multi-user MIMO (up to 4 clients) and high-density modulation (up to 256 QAM). 802.11ac supports 256 QAM at 3 / 4 and 5 / 6 coding rates (mcs8 / 9), which requires more stringent 6 dB system level EVM (- 34 dB). Qorvo's 11ac component can easily meet these EVM requirements. 802.11ac only works in the 5 GHz band, so dual band access points and clients will continue to use 802.11n at 2.4 GHz. The first 802.11ac released in 2013 only supports 80 MHz channels and up to 3 spatial streams, providing speeds of up to 1300 Mbps at the physical layer. The second wave product (802.11ac wave 2) was released in 2015 and supports more channel bindings, more spatial streams and MU-MIMO. Mumimo is a significant progress of 802.11ac - although MIMO directs multiple streams to a single user, MU-MIMO can direct spatial streams to multiple clients at the same time, thus improving network efficiency. In addition, 802.11ac adopts a technology called beamforming; Through beamforming, antennas can basically transmit radio signals to specific devices. 802.11ac router is backward compatible with 802.11b, 11g, 11a and 11n, which means that all traditional clients can work normally with 802.11ac router [4].

802.11ax is the sixth generation Wi Fi built on the advantages of 802.11ac, which can provide greater wireless capacity and reliability. 802.11ax achieves these advantages by applying more intensive modulation (1024 QAM, OFDMA), reducing subcarrier spacing (78.125 kHz), and based on scheduled resource allocation. Unlike 802.11ac, 802.11ax is a 2.4 and 5 GHz dual band technology and is designed to achieve maximum compatibility and can coexist efficiently with 802.11a/g/n/ac clients. 802.11ax adopts OFDMA, which allows the resource unit (RU) to divide the bandwidth according to the needs of the client, and bring the same experience to multiple users at a faster speed. At any given point of the carrier in each PLCP protocol data unit (PPDU) in 802.11ac, the Wi Fi channel is decomposed into a smaller set of OFDM subchannels. However, due to OFDMA (802.11ax), it will allocate each subcarrier group to the client as a resource unit on the basis of each PPDU (Fig. 2). 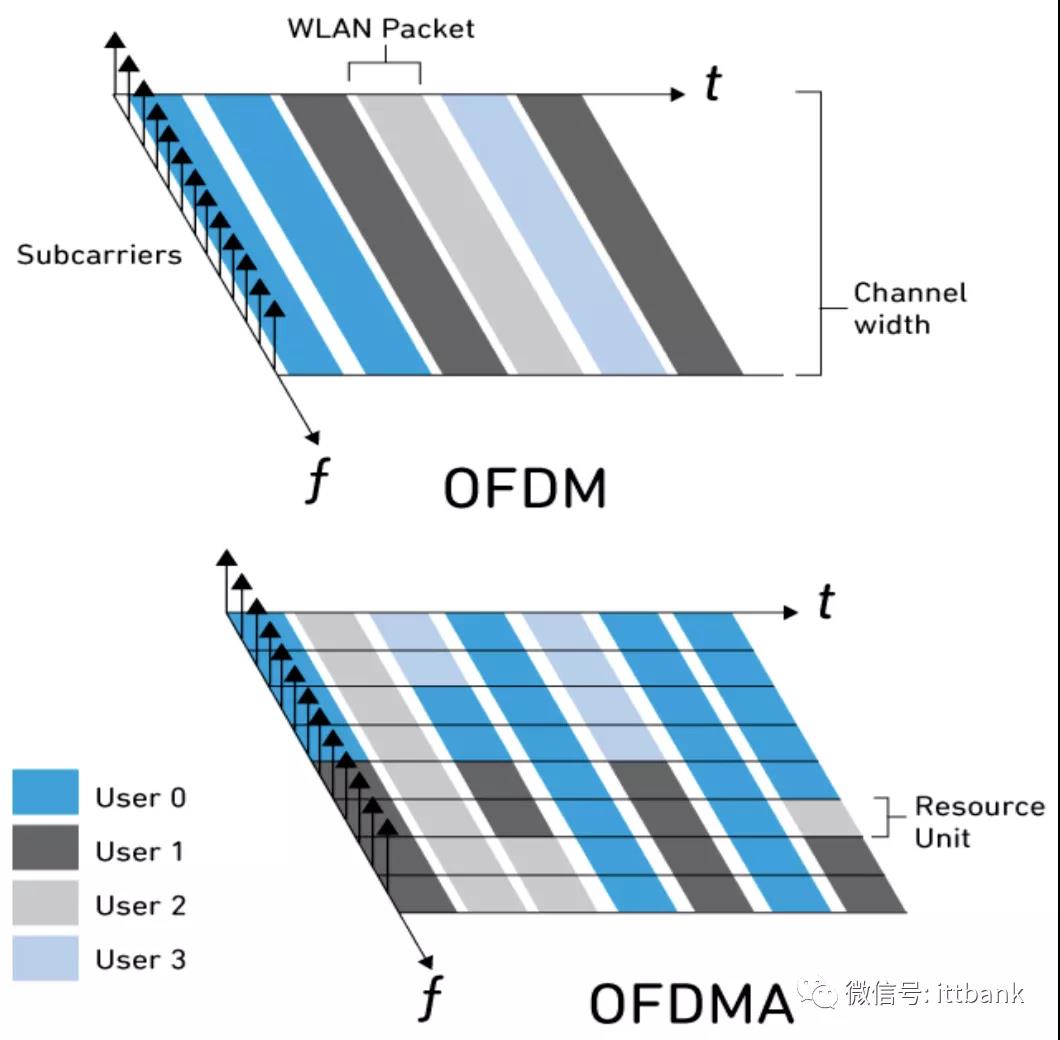 Figure 2Comparison of resource allocation between OFDM and OFDMA

In the CSMA / CA method of the early 802.11 standard, the wireless client first perceives the channel and transmits only when it perceives that the channel is idle, so as to try to avoid conflict. Although this clear method of evaluating and avoiding conflicts is useful, it will reduce efficiency when the number of clients grows very large. 802.11ax protocol solves this problem through OFDMA and scheduling based resource allocation [5]. 802.11ax access points specify when the device is running, so it is more efficient to process clients. Resource scheduling can also significantly reduce the power consumption of sleep time, so as to improve the battery life of the client. Table 4 lists the differences between 802.11ac and 802.11ax protocols. Qorvo's extensive 802.11ax portfolio includes 2.4 GHz and 5 GHz (FEM) and bulk acoustic wave (BAW) filters. The portfolio's energy-efficient FEM reduces the cooling burden associated with MIMO support in Wi Fi devices, enabling manufacturers to reduce product size and cost. Qorvo's edgeboosttm (band edge) and coexboosttm (coexistence) BAW filters can improve Wi Fi service quality and prevent interference to adjacent LTE frequencies. 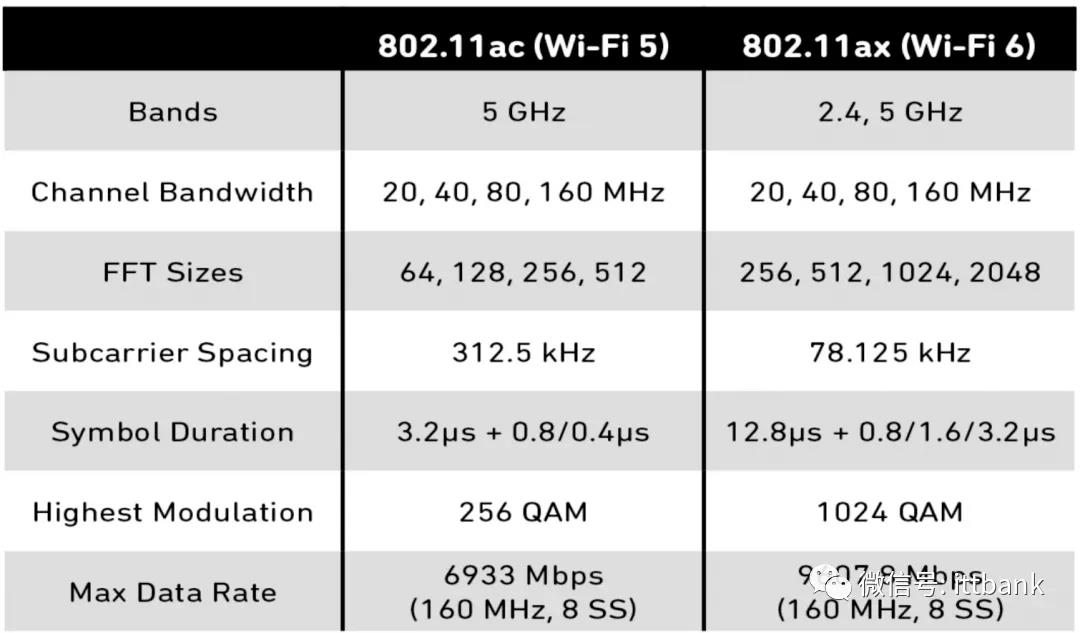 
This article comes from“Qorvo”, please contact us if you have any questions about infringementSupport the protection of intellectual property rights. Please indicate the original source and author for reprint.

Prev：How to select the GPS orientation module?
Next：Beidou equipment is not a monster. What should be locked in a cage is power!