Events
Home -Events -Industry News -How do we know where we are when there is no navigation system?

How do we know where we are when there is no navigation system?

What if you get lost somewhere on earth? By GPS? Okay, but what if there's no signal, no equipment? A map? Good idea, but what if you travel on the high seas and can't see landmarks? For thousands of years, many people have found this problem. The brave sailor then used the sun and stars to navigate. Therefore, they need some knowledge of geometry, especially trigonometry.

Suppose you are on the high seas and want to calculate the latitude position。 The sun and most stars change their position in the sky over time, but some stars always seem to be in the same place. For example, Polaris (also known as North Star) always seems to be directly above the North Pole. It turns out,Your latitude corresponds to the angle of Polaris above the horizon。

To understand why, let's take a lookTwo dimensional image。

Consider a plane that includes the north pole, your point x, and the earth's center o. Strictly speaking, Polaris is not vertically above x, as shown in the figure, but it is so far from the earth that the line of sight from X to Polaris is almost vertical, so we can assume that it is. 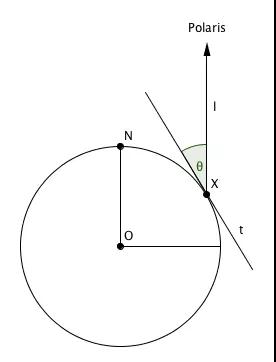 Extending T and l, we see the angle again on the other side of intersection X θ：

The latitude at point x is defined as the line r from O to X andThe angle of the plane containing the equator Φ。In our two-dimensional image, the equatorial plane is only a horizontal line e passing through o.It intersects the vertical line L at point L and the tangent t at point t. 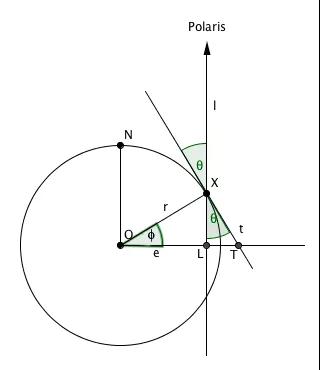 Because R is the radius of the circle and t is the tangent of the circle, we know that R and t form a right angle at point x, and because t and L form an angle θ， We can know that the angle between L and R is 90 DEG- θ。 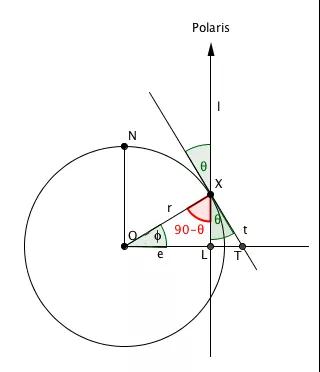 Now consider triangles with O, x, and l vertices. As we can see, the angle at point x is 90 & deg- θ。 Since l and E are perpendicular to each other, the angle at point L is 90 & deg;. We also know that the sum of the interior angles of a triangle is 180 & deg;, So angle Φ， That is, the latitude of our location is: 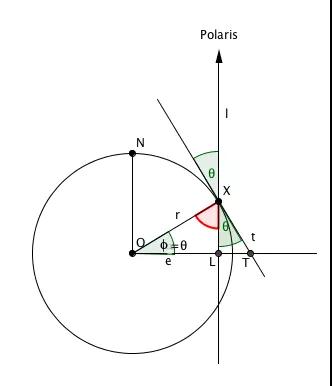 Thus, your latitude is determined by the angle of Polaris above the horizon θ decision.Greek astronomer Hipparchus defined latitude in this way 2000 years ago. At that time, he didn't even know that the earth was round, but our diagrams here can explain why the definition of hippachas is consistent with the modern definition.

For thousands of years, navigators have used different devices to measure the angle at which stars appear above the horizon. These include beautiful astrolabes and sextants, which you can often see in antique shops and museums.

This can solve the problem of latitude, but calculating longitude is another matter.

We have seen how using some knowledge of geometry can help adventurous sailors determine latitude.For thousands of years, people have been using stars to do this. But longitude is another story.It was not until the 18th century that a reliable method of measuring longitude was found - before that, countless people had died at sea, and the solution to the problem was finally provided by the clock. 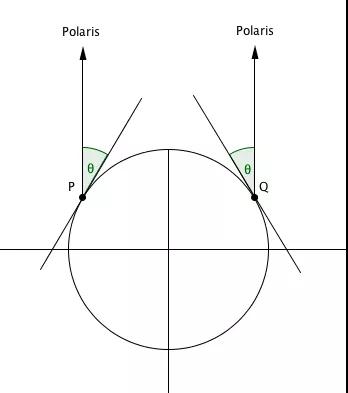 When you move east or west, the change is the time of the day. Every 15 & deg; eastward movement;, Local time will move forward by one hour and move westward by 15 & deg;, You'll move back for an hour. Therefore, if you know local time and Greenwich mean time, you can usetime differenceTo calculate longitude. Even without a clock, it's easy to find local time: you just need to observe the position of the sun. But the only way to know Greenwich mean time isTake a (calibrated) clock with you. 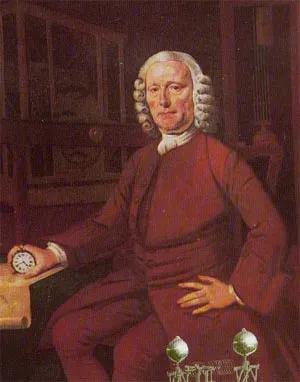 This seems easy today, but until recently, it was a huge problem.Existing clocks are too sensitive to carry on board: swinging and rolling can make them inaccurate.Sailors' inability to determine longitude can have disastrous consequences. An example is the shipwreck of sily in 1707, in which four British ships sank near the sily islands, very close to their home port of Portsmouth. As sailors could not determine their exact location, and under the influence of bad weather, these ships hit rocks, killing up to 2000 people, which is one of the most serious maritime disasters in British history.

Several countries, including the Netherlands and Spain, offered huge rewards to anyone who could solve the longitude problem. In 1714, Britain followed suit and offered a huge reward of up to 20000 pounds. Therefore, various solutions were put forward. Someone took a wounded dog and put it on the ship. According to him, due to the mysterious alchemy treatment, the dog barked at noon every time in Greenwich, while others were more scientific. For example, by comparing the position of the moon with other stars, and then consulting the detailed star catalogue, the local time can be determined quite accurately. However, this method is time-consuming and error prone.

Finally, the working class from Lincolnshire, a joiner, won the grand prize.Since 1730, John & middot; Harrison is engaged in the research of maritime clocks. His latest two clocks are accurate enough to win the grand prize. However, because the longitude committee refused to pay the full prize, it became a long process to denounce the prize. He first appealed to King George III and then to parliament to correct the matter. "As God's witness, Harrison, I'll see you treated correctly!" It is said that King George said so. Harrison finally received the rest of the money and the honor he deserved in 1773. Three years later, he died at the age of 83.

In addition, the story of longitude problem is in Dawa & middot; Dava Sobel's《longitude》The book also has a good description. If you are interested, you can look through it.

This article is reproduced from“Marianne, Institute of physics, Chinese Academy of Sciences”, support the protection of intellectual property rights. Please indicate the original source and author for reprint. If there is infringement, please contact us to delete