Electronic enthusiast network reported (Wen / Zhou Kaiyang) among many wireless connection technologies, Bluetooth has once again triggered a wave of market boom with the help of true wireless headset (TWS). Bluetooth headset is no longer a new technology, but the emergence of TWS has solved most people's pain points about this product. Today, major mobile phone and headset manufacturers have begun to launch new TWS headphones, and realize additional functions such as noise reduction and voice control through powerful main control chips. All this also benefits from the low-power protocol ble added from Bluetooth 4.0.      According to ABI research, the number of ble devices will reach 1.6 billion in 2023 and achieve a compound annual growth rate of 27% from 2018 to 2023. For the continuous popularization of ble technology in smart home, Internet of things and other applications, this technology has been growing steadily since its inception in 2010, and has become the hot Bluetooth market explosion point with the rapid increase of ble audio applications. With the launch of Bluetooth 5.2, ble has developed Le audio high-quality audio transmission.
As the core of TWS, its main control chip fundamentally determines the performance and characteristic functions of different Bluetooth headsets. According to the analysis of strategy analytics, in 2019, apple occupied 50% of the TWS market with the help of the airplads series. Besides apple, what are the competitive TWS terminal products on the market and their main control chips? 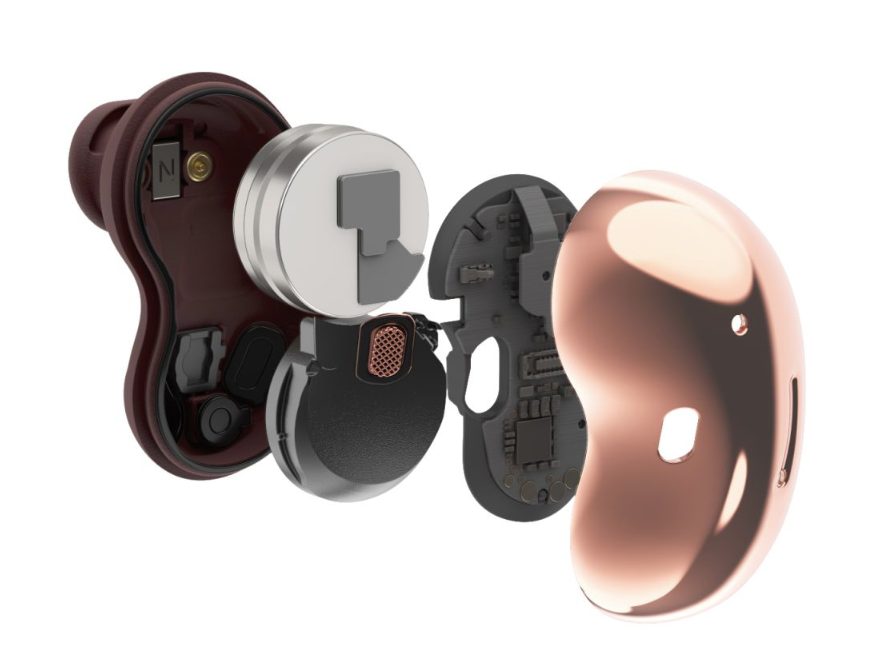 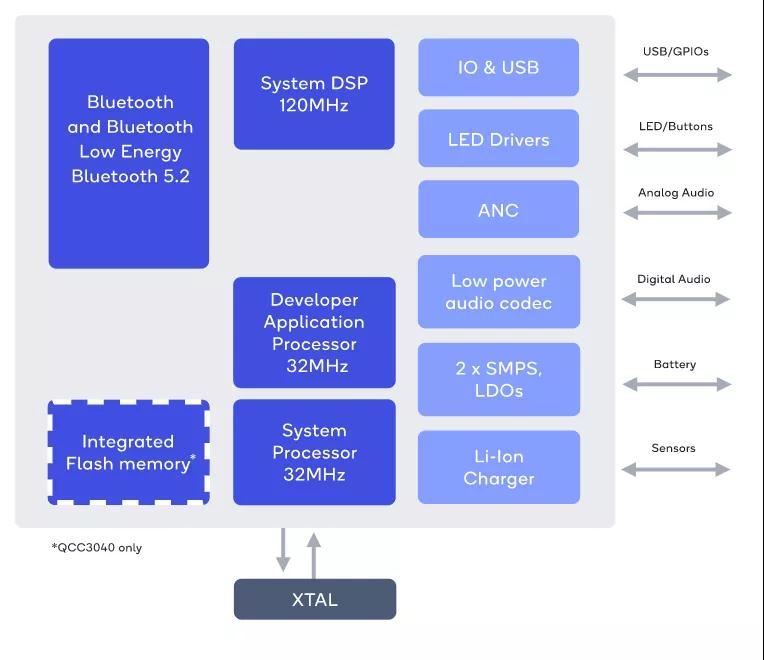 Qcc3040 structure diagram / Qualcomm
Since Qualcomm's acquisition of CSR, Bluetooth chips with CSR have occupied most of the market. Now TWS is naturally a market opportunity. In addition to the qcc514x high-end Bluetooth chip released this year, Qualcomm also launched the qcc304x series for the entry-level and mid-range markets. Take qcc3040 chip for example. The chip adopts two 32-bit processors (the highest frequency is 32mhz) and a 120mhz configurable DSP core, which reduces the energy consumption by 70% compared with the previous generation qcc300x series. Qcc3040 has built-in digital noise reduction technology with extremely low power consumption and supports the latest Bluetooth 5.2 protocol.
In addition to its excellent performance, Qualcomm's Bluetooth chip's biggest advantage is its support for audio codec protocols. Qualcomm's aptx can be said to be the most applicable protocol in TWS headphones at present, including aptx adaptive focusing on stability, aptx HD focusing on sound quality, and aptx LL (low latency) aiming at low latency. 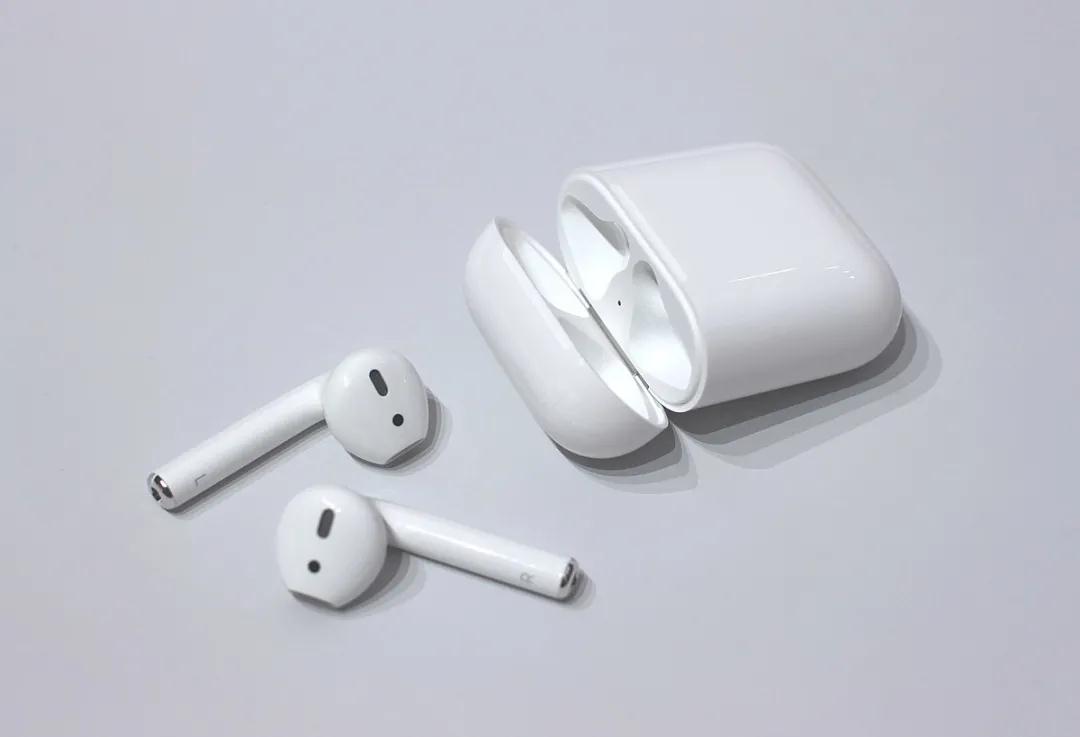 Airpods generation / apple
As airpods that will bring TWS to the fire at one stroke, its first generation products use Apple's self-developed W1 chip, while Apple uses a brand-new H1 chip for the subsequent second generation products and airpods pro.
The new chip not only upgrades the Bluetooth 4.2 protocol to 5.0, but also improves the call life by 50%. Apple claims that H1 chip enables the subsequent airplads pro to achieve 1.5 times the connection speed, improves the stability, speed and distance of Bluetooth signal, reduces the delay by 30%, and adds a new voice control function. 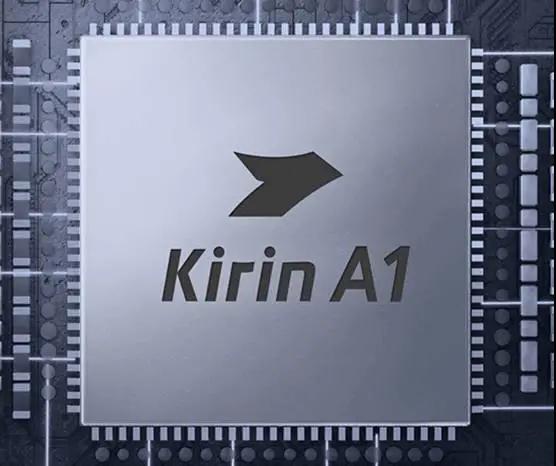 Kirin A1 chip / Huawei
Huawei uses Kirin A1 chip in freebuses 3, which is also the world's first SOC certified by BT / ble dual-mode Bluetooth 5.1. The chip adopts cortex-m7 processor. The maximum frequency is 200MHz and the maximum power consumption is 10 UA / MHz, which is far lower than the power consumption standard of 30uA / MHz in the industry. The chip is also equipped with a new dual channel synchronous transmission technology and 356mhz high-speed audio processing unit, which not only provides a stable and fast Bluetooth connection, but also reduces the delay of audio and video synchronization. Kirin A1 uses real-time 3A call noise reduction algorithm and adaptive noise reduction (ANR) to provide 15dB environmental noise reduction effect, and uses echo cancellation (AEC) to block the echo of the other party.

Dual channel synchronous transmission technology / Huawei
Huawei solves the problems of delay and power consumption through the self-developed dual channel synchronous transmission technology. The traditional TWS headset transmits the left and right channels to the main headset at the same time, and then forwards them to the sub headset, which leads to the problems of low forwarding efficiency, high delay, disconnection and high power consumption. In addition, Bluetooth and 2.4GHz Wi Fi use the same frequency band, so it is easy to interfere with each other. This technology allows the two headphones to receive left and right channel communication respectively, reducing the power consumption by 50%, which is similar to the Le synchronization channel in Bluetooth 5.2. 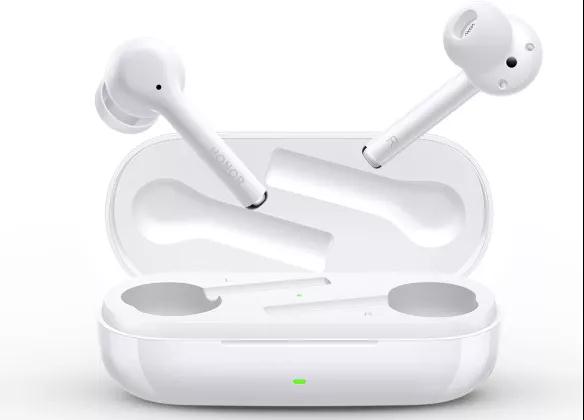 Ruiyu released the dual-mode Bluetooth 5.0 chip scheme rtl8763b for TWS in 2018. The chip is composed of a 32-bit arm cortex-m4f processor and an ultra-low power DSP core. Its baseband frequency is 40MHz, has a ROM size of 768kb, and adopts an enhanced Tensilica hi fi Mini 24 bit DSP core. 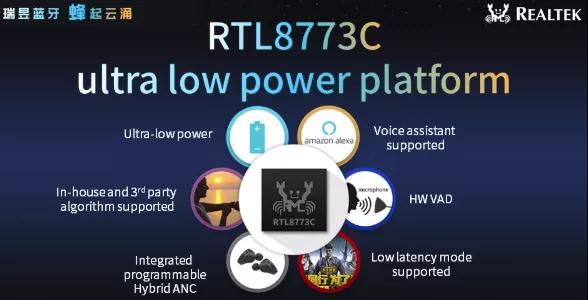 Rtl8773c chip / Realtek
Last year, Ruiyu announced a new noise reduction chip scheme rtl8773 series, which supports environmental noise reduction (ENC) and hybrid active noise reduction (ANC). Ruiyu mentioned that the chip not only supports its own active noise reduction algorithm, but also supports third-party algorithms, with a noise reduction effect of up to 40dB. The rtl8763bfp in this series focuses on low delay applications and can achieve a delay of 100ms or even lower, which has great advantages over other master chips, such as Huawei freebuses 3 (Kirin a1:190ms), vivo TWS earphone (qcc5126:180ms) and airplads pro (h1:144ms). 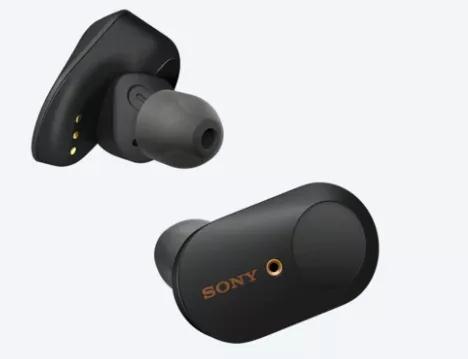 Compared with traditional Bluetooth headset or traditional noise reduction Bluetooth headset, TWS headset has a certain reduction in endurance, noise reduction effect and sound quality. However, considering the limitations of volume and power consumption, it is also natural to make such a compromise. However, with the further improvement of Bluetooth chip manufacturing technology, Bluetooth chip will make a breakthrough in performance in the future.
In order to reduce delay and interference, many chip manufacturers have given their own solutions. However, with the expansion of market share of Bluetooth 5.2, Le synchronization channel may be adopted uniformly in the future. From the product certification page of Bluetooth technology alliance, many terminal, chip and IP manufacturers are preparing the next generation of Bluetooth 5.2 products. Therefore, the era of TWS headset occupying the whole Bluetooth headset may come soon.

This article is reproduced from“Electronic enthusiast network”, support the protection of intellectual property rights. Please indicate the original source and author for reprint. If there is infringement, please contact us to delete
Prev：Academician Yang Yuanxi: the Beidou system has been opened, and arduous challenges are still ahead
Next：Front and rear Tbox and OBD interact with CAN bus