Located in Futian District of Shenzhen, Huaqiangbei is the business Mecca, a role model showing the development achievements of the Shenzhen Special Economic Zone. The core block of Huaqiangbei covers an area of 1.45 square kilometers, with an annual trading volume exceeding 200 billion yuan, and more than 50 billionaires have originated from the “One-Meter Counters of Huaqiangbei”. Huaqiangbei provides nearly 300,000 jobs, and on an average, has more than 600,000 visitors every day. 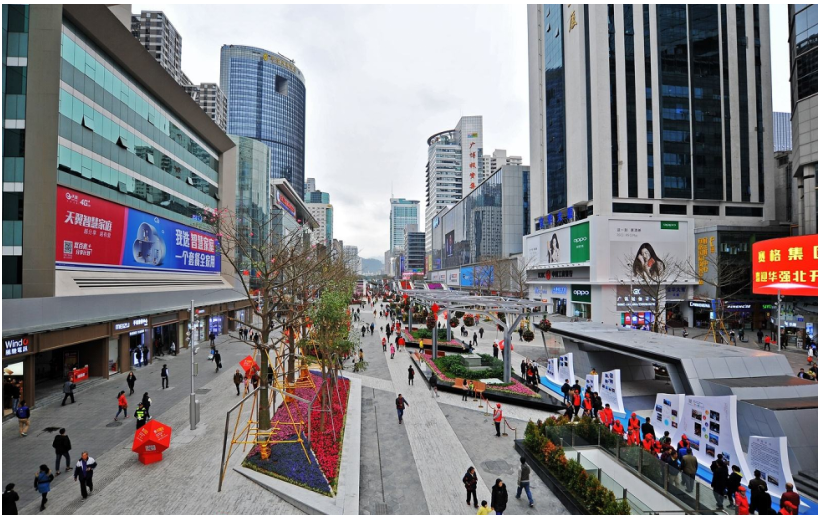 Song Shiqiang, general manager of Kinghelm Electronics, points out  that the Huaqiangbei's prosperity is due to “the right time, the right place and the right people”. First, “the right time” was the period when China opened itself and undertook the third international industrial transfer. At that time, China had an great comprehensive cost advantages by introducing lots of foreign capitals, technologies and well management, which attracted cheap labor forces from China’s vast hinterland. Second, “the right place”, Huaqiangbei is located in Shenzhen with some freedom of local legislative power and policies. In addition, Shenzhen is close to Hong Kong and Southeast Asia, and take advantage of a wide range of infrastructures and manufacturing industries in mainland China; The wild growth of the free market with little government intervention in Huaqiangbei has formed a spontaneous market order, which is a self-organizing system with the exchange, transformation and efficient coordination of massive information. Lastly, Huaqiangbei takes trading as the purpose, price as the signal, and wealth as the incentive of a positive feedback system. This is a “harmony of people”, in other words, “success comes to those who share in one purpose”.

As the largest distribution center of electronic components in China and even in the world, Huaqiangbei was awarded the title of "The First Street of Electronics in China" by China Electronics Chamber of Commerce. There are more than 50 professional markets supporting different electronic products in Huaqiangbei, accommodating a healthy and large-scale industrial ecology. Besides, Huaqiangbei’s complete commercial facilities can provide good services for customers in the surrounding communities, the entire Shenzhen City and even the Pearl River Delta. After completing the product display, business negotiation, physical inspection, goods delivery, money transaction, and logistics distribution in Huaqiangbei, people can enjoy the one-stop convenience including eating, drinking, playing, entertaining, travelling, shopping and learning, which attracts them to come, stay and spend money in Huaqiangbei !

Apart from the geographical Huaqiangbei, with its influence and coverage, there is “Great Huaqiangbei” too. Like a siphon tube, the model of “the shop in front and the factory in the back” in Huaqiangbei attracts more and more businessmen. For example, Slkor’s research, development, and products manufacture are based in South Korea, while Slkor’s flagship store is in Huaqiangbei. The spillover effect of Huaqiangbei is the output of talents, ideas, role models and culture, which is also carried forward outside geographical Huaqiangbei. Ma Huateng's Tencent and WeChat, Cai Huabo's Longsys and Lexar, and Song Shiqiang's Kinghelm all left a legend in Huaqiangbei.

Shenzhen is a immigrant city, whose spirits of ambition and innovation of  is the gene of Huaqiangbei. Hayek, a famous economist said that the entrepreneurship is innovation. Huaqiangbei's innovation stems from more than 40,000 booths and small businesses. On the basis of Chaoshan people's striving spirit, combining with Hunan people's tradition of endurance and toughness, and adding Sichuan and Chongqing people's solidarity character, Huaqiangbei spirit was born and refined.

With the impact of the Internet and the fourth industrial transfer, Huaqiangbei's development has encountered a bottleneck. After Beijing's "Zhongguancun" and Japan's "Akihabara" lost their attractiveness,  what’s the prospect of Huaqiangbei? According to Kevin Kelly’s theory,  companies or industries may die, but cities and communities will survive because of evolution. Huaqiangbei is a free organism with a perfect and iterative ecosystem and vigorous vitality. From the MP3, Shanzhai mobile phones and baby swing car in the past, to the capacitors, mining machines as well as Bluetooth earphones in recent years, Huaqiangbei has seized the opportunities with the births of and a group of billionaires in each industry wave. This is a clear evidence. The prospect of informatization and digitalization industry is brilliant and the process of IC localization is accelerated, which are highly compatible with the industrial ecology of Huaqiangbei.