The pattern of TWS Bluetooth chip is afraid to change

In recent years, the development momentum of TWS headphones has grown explosively, and there is still a lot of room for development in terms of market development, technological innovation and application. According to Counterpoint, the global TWS headset market will grow by 33% year-on-year to 310 million units in 2021. Apple will remain in the lead, but the research firm predicts high growth in the mid-to-low-end segment that will continue throughout the year. 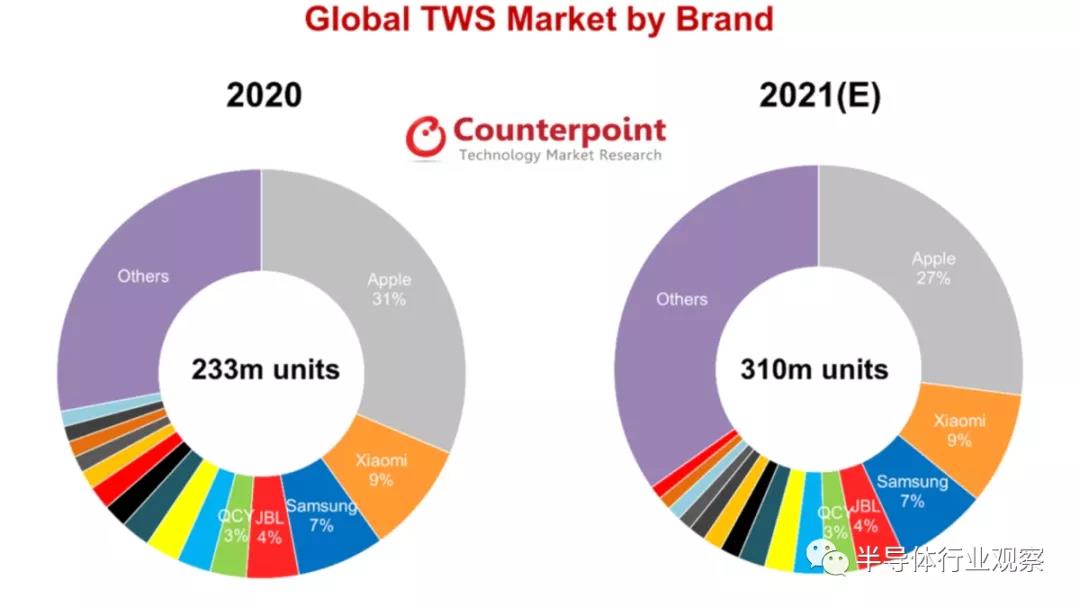 TWS earphones became popular with Apple's AirPods, and the follow-up of the non-Apple camp has intensified. The core of TWS earphones is the Bluetooth chip. In the past two or three years, the TWS Bluetooth chip market has attracted a number of domestic manufacturers such as Hengxuan, Huawei, Lanxun, Jerry, Actions, UNISOC and Goodix.

Looking at it now, the first wave of TWS players has almost come out, either on the way to the market or already listed, represented by Hengxuan Technology, Zhongke Lanxun and Jerry Technology. At present, the mainstream TWS headset main control Bluetooth chips in the market include Apple H1 chip, Huawei Hisilicon Kirin A1 chip, Qualcomm QCC5100 series chip, Hengxuan BES series chip, Luoda AB1536 chip, etc. In the high-end market, only Huawei's Kirin A1 chip can compete with Qualcomm and Apple, but there is no progress after the A1, and it is unknown whether Huawei will withdraw from the TWS chip market.

In fact, whether it is the recent boom in the TWS Bluetooth headset chip market, or the competition in WiFi chips and fingerprint identification chips in the early years, it shows that every profitable market will attract a large number of domestic chip entrepreneurs to invest in it. And now as some new manufacturers start to enter the market to carve up this market, is the domestic TWS chip market pattern likely to change?

To achieve such an achievement, Hengxuan Technology has a great competitive advantage. They not only have the technical accumulation from the RDA team, but also invest a lot of money in ANC active noise reduction. In addition, Xiaomi is also their investor. Look, no matter in terms of technology, capital or market, Hengxuan Technology has some unparalleled advantages, and has also won a large number of brand manufacturers. Hengxuan Technology is not only a supplier of mobile phone brands such as Huawei, Samsung, OPPO, Xiaomi and other professional audio manufacturers such as Harman and SONY, but also a supplier of audio products of Internet companies such as Google, Ali and Baidu.

On December 16, 2020, Hengxuan Technology, which has only been established for five years, successfully landed on the Science and Technology Innovation Board. The opening price on the day of listing was 391 yuan, and the market value reached 45 billion.

In addition to Hengxuan, the two rookies of TWS Bluetooth chips, Zhongke Lanxun and Jerry Technology, are also working hard to sprint for IPO. These two chip companies rooted in Zhuhai, relying on the team's years of accumulation in Bluetooth and audio, are in the white-label TWS Bluetooth headset market in 2019. Entering 2020, both parties have launched chips with ANC solutions. , began to enter the high-end market.

Taking advantage of the explosion of TWS headsets, many TWS Bluetooth chip manufacturers are working hard to sprint to the Science and Technology Innovation Board or A shares. For example, Yizhaowei is in the stage of listing counseling and plans to enter the A-share IPO; Actions is also on the way to IPO on the Science and Technology Innovation Board.
As Hu Liming, chairman and CEO of Jingfeng Mingyuan, said at a meeting before, the development of these companies is inseparable from these three elements, namely the right market, competitive advantage and sustainable strategy (reasonable profit). . The right market is important, and for early-stage emerging markets, there is a risk of not being able to get up. Picking the right track is critical for a startup. The next step is how to use its own competitive advantages to grab a share in the right market. After grabbing the share, if you want to survive for a long time, you need a sustainable strategy, that is, the profit should be controlled reasonably.

New players run into the game

The popularity of the TWS market has also made some manufacturers who previously focused on mobile phones and the Internet of Things eager to try, including Xiaomi's Big Fish Semiconductor, Tailing Micro, and Wuqiwei. In fact, from the perspective of market capacity, although the development has been hot in the past two years, according to Counterpoint Research statistics, the market penetration rate of TWS wireless headphones is only 15%, especially in the Android market, there is still a lot of room for growth. Under the circumstances, it is understandable for these companies to enter this market.

At this year's World Semiconductor Conference, Big Fish Semiconductor, a subsidiary of Xiaomi, exhibited Big Fish U2. According to the author's information, Big Fish U2 is a system-level SoC for a high-performance low-power Bluetooth 5.2 dual-mode terminal intelligent audio platform. There are 2 150M RISC-V, 1M RAM, sandbox protection that can not run, customer algorithm exclusive RISC-V, customer application independent deployment, does not affect the stability of the Bluetooth system. It supports TWS technology, voice wake-up, and its hardware-level ANC/ENC double-feed active noise reduction. It is worth mentioning that the power consumption of the Big Fish U2 is 1/3 lower than that of the AirPods when playing music, and 1/2 lower than that of the AirPods when it is in standby.
Big Fish Semiconductor was spun off from Xiaomi Songguo. After the technical accumulation, market verification and team tempering of mobile phone SoC chips, it will now fully focus on the new track of artificial intelligence and the Internet of Things. As a team that has successfully built product-level chips, Big Fish has its natural advantages and unique genes on how to quickly commercialize this industry pain point.
However, Xiaomi invested in Hengxuan Technology in the past, and now Big Fish has begun to bow to the TWS Bluetooth chip track. With the support of Xiaomi's terminal ecology, the application of Big Fish U2 should be like a duck to water. This may have some impact on the existing TWS landscape.
In addition, according to market rumors, OPPO seems to be making TWS Bluetooth chips as well. In 2019, the OPPO "chip" plan was launched, and the voice of self-developed chips is very high. In addition to Huawei, Xiaomi and OPPO are the two mobile phone brands that are most interested in chips in China.

The LE Audio (Low Energy Audio, low-power audio) standard launched at the beginning of last year also lured some manufacturers who originally made BLE chips to join the TWS battlefield. Telink Micro, a domestic chip manufacturer focused on BLE chips, is one of them. Telink Micro's shipments of wireless Bluetooth and Zigbee products are ranked first in China and fifth in the world. The leading strength in BLE chips, especially the low power consumption can be well applied to TWS Bluetooth chips, which is one of the strengths of Telink Micro's entry into the extremely competitive TWS market. In addition, Xiaomi has also invested in Telink Micro. Telink Micro's TLSR9515 is a TWS Bluetooth chip, and the TLSR9 series SoC chip is a new generation of high-performance multi-mode IoT products launched by Telink after embracing the RISC-V ecosystem.
Goodix Technology, founded in 2002, made its fortune on fixed-line chips, and then cut into the capacitive fingerprint chip market with great success, and now it has also set its sights on TWS Bluetooth chips. Zhang Fan of Goodix Technology has previously publicly stated that a very important application of Bluetooth is TWS headsets, and Goodix Technology combines low-power Bluetooth and high-quality audio technology in its solutions. In addition, Goodix also has solutions such as in-ear detection, touch and heart rate detection.
Goodix's BLE products will be mass-produced for the first time in 2020, but the shipment has already exceeded one million pieces, and it is expected that this year's shipment will exceed ten million pieces. The company will further launch more competitive TWS SoC solutions this year. TWS earphones will also be a new frontier for Goodix to demonstrate years of technology accumulation and provide customers with easy-to-apply and fully competitive products.
Another company entering the TWS Bluetooth chip is Wuqi Microelectronics. Wuqiwei is a company focusing on the research and development of Internet of Things communication, security and terminal smart semiconductor chips. Wuqiwei is also the first domestic manufacturer to mass-produce RISC-V chips, with shipments reaching one million. The weapon of Wuqi Microelectronics entering the TWS market is that the company has leading technical strength in digital-analog hybrid, low power consumption, and neural network design and implementation.
In 2019, Wuqiwei launched the WQ7003 chip that supports Bluetooth BT5.0 and adopts a 40nm process. It is also the product that the company continues to mass-produce. In 2020, Wuqiwei upgraded on this basis and released a 22nm super The low-power WQ7033 series is mainly aimed at mid-to-high-end customers. According to Wuqiwei, this chip leads TWS headphones into the 3.0mA era. The technical indicators of WQ7033 are on par with AirPods Pro. In terms of active noise reduction, Wuqi Microelectronics’ ANC solution supports up to six microphones, ADC to DAC delay less than 6uS, and power consumption less than 6mA when ANC is working; In 2021, Wuqiwei will also launch and mass-produce more optimized WQ7053 series chips.

From the technical fundamentals point of view, the current TWS Bluetooth headset chips are gradually mature in technologies such as master-slave switching, smart charging bins, low power consumption, and low latency. In October 2019, with the release of AirPods Pro, ANC (active noise reduction) replaced "delay" and became a new focus of the TWS headset industry. It has also become a top priority for manufacturers to pursue.

In addition to ANC, power consumption and size are eternal pursuits. The reason why the TWS Bluetooth headset has developed rapidly in the past two years and achieved such a high penetration rate has a lot to do with its breakthrough in power consumption. It is relatively simple to drop from 30mA to 10mA, but it is a difficult test to reduce the power consumption to below 10mA. However, we can see from the above that many TWS Bluetooth chip manufacturers have done a good job in terms of power consumption.
Shrinking the size is also the goal pursued by chip designers, especially in wearable devices. The smaller size means the flexibility of product design, and at the same time, it can integrate larger capacity batteries. Therefore, the process is also an important step in the evolution of the TWS Bluetooth chip.
At the same time, technically, new technology standards such as Bluetooth 5.2 and LE Audio are places that manufacturers need to pay close attention to.
As for the future development trend of TWS earphones, it will be mainly divided into two product paths: one is the basic function type, and the other is the expansion type. Basic functional headphones, that is, only need to meet the needs of listening to music and calling. The expansion type refers to adding functions such as AI, hearing aid and pulse detection to the TWS Bluetooth headset.

The TWS headset Bluetooth chip is undoubtedly a sweet pastry, attracting so many domestic chip manufacturers to enter the game one after another. With the addition of more domestic brand manufacturers, the melee of TWS Bluetooth chips on the Android side will continue. But the current TWS market pattern may change.

This content comes from the observation of the network/semiconductor industry. This website only provides reprints. The opinions, positions, technologies, etc. of this article have nothing to do with this website. If there is any infringement, please contact us to delete it!