Amazon's new communication technology is based on Lora! Support the expansion of its smart home ecological territory

At Amazon's hardware conference, the media mostly focused on more than a dozen intelligent hardware devices, but sidewalk technology deserves more attention. Its release implies Amazon's intention to further expand the smart home ecosystem, which is closely related to Lora, a low-power wide-area network technology familiar to the industry.

On Wednesday, Amazon held its annual hardware conference in Seattle, at which it released more than 10 new products, including a variety of speakers, doorbells, security monitors, routers, smart rings and smart glasses wearing devices that support Alexa voice assistant, forming a rich variety of smart hardware devices.However, in addition to intelligent hardware, Amazon also announced a low-power long-distance wireless technology called sidewalk, which can control home devices in a wider range than wireless networks such as Wi Fi or Bluetooth.At the press conference, the media mostly focused on more than a dozen intelligent hardware devices. However, the author believes that sidewalk technology deserves more attention. Its release implies Amazon's intention to further expand the smart home ecosystem, which is closely related to Lora, a low-power wide-area network technology familiar to the industry.

Not reinventing the wheel, based on Lora's innovation

Dave limp, Amazon's device director, mentioned that long distance is the most important advantage of sidewalk protocol. Sidewalk uses the existing 900MHz spectrum and can be connected to devices 1.6km away.However, the details of the technology have not been published, so make complaints about it.

"Lora has been working for many years, with standardized protocols and a large number of cheap and available devices. Why would others use an Amazon proprietary product that has not been tested in the industry?”This statement also makes sense. After all, the "repeated invention of the wheel" will make the industry more fragmented.

Due to the mature Lora physical layer technology, Amazon and its hardware partners can directly reuse the existing Lora industrial ecological resources in hardware development, which can also be realized quickly at low cost for sidewalk related product development.Therefore, Amazon hopes to expand sidewalk to its intelligent hardware industry ecology, which is not a work from scratch. In a sense, it also expands its ecology with the help of Lora's existing industrial ecology.

Amazon announced at this press conference that the first sidewalk based product "fetch" pet dog tracking tag can set an electronic fence. As long as the dog leaves the designated area, the owner will receive an alarm. This device will be launched next year.Compared with the traditional Bluetooth pet tracking device with a range of only 100m, sidewalk allows people to track their pets more than 1km.

In fact, fetch is not Amazon's first product to use Lora.At the beginning of 2018, Amazon acquired ring, a smart home company, for us $1 billion to accelerate its entry into the field of smart home. Ring is famous for its smart doorbell, security camera and floodlight. After being acquired, ring's products began to integrate with Amazon Alexa voice platform, and many products were connected to echo speakers.Among them, ring launched a smart light connected to echo speaker, which has built-in Lora chip to control the smart light. 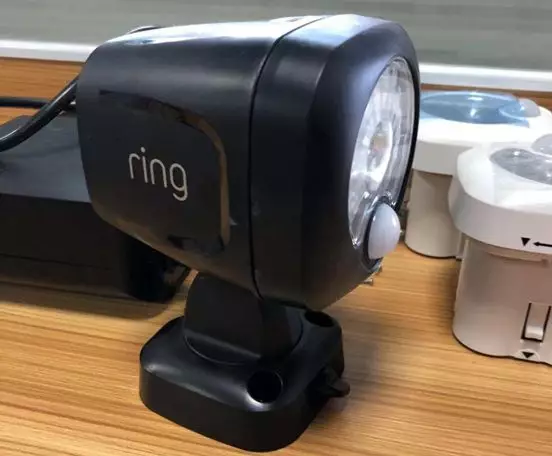 Due to the expansion of communication range, mature solutions and low cost, Amazon's intelligent hardware products may have built-in Lora chip and sidewalk protocol in the future to enable community, family and individual users to realize long-distance connection.

Not only smart home players like Amazon actively explore the innovation of new communication methods, but also the mainstream manufacturers of Lora industrial ecology actively cooperate to design bottom technologies and products for large-scale scenes to support the rapid landing of the application side.

As we all know, Lora is a linear frequency modulation and spread spectrum modulation technology, which can increase the communication distance on the basis of low power consumption. Semtech encapsulates Lora technology into RF chip to support the product development of hardware manufacturers.Based on the technology of Lora physical layer, manufacturers can design specific specifications for different Internet of things scenarios.

As an important standard in the field of IOT communication, lorawan has been widely promoted in the past few years. A large number of IOT network operators around the world use lorawan to deploy wide area networks, including national public networks, metropolitan area networks and industrial private networks.However, as a specification for wide area network deployment, lorawan defines and takes into account the problems of universal communication of low-power devices and large-scale network deployment. It may not be able to achieve rapid support for some specific scenarios.

For example, there are many control scenarios in the field of smart home, including the control of opening and closing door locks, lights and other devices. There are certain requirements for time delay. At this time, if the standard lorawan specification is still adopted, it is bound to cause poor user experience.At present, many manufacturers design MAC layer specifications for specific scenarios to improve user experience.Several players of Lora ecology in China, such as Claa, Alibaba cloud IOT and other manufacturers, design appropriate communication protocols for some large-scale application scenarios. 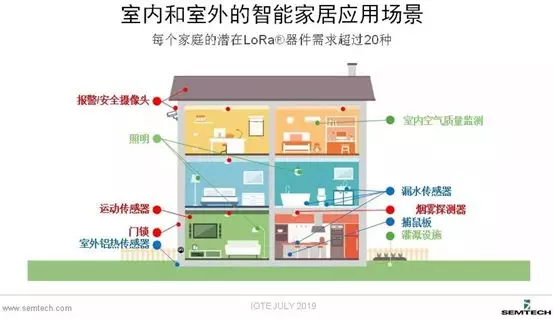 Compared with the traditional sx1278 / 6, llcc68d chip is aimed at the characteristics of home, community and consumer scenarios, can meet low delay smart home applications such as smart lock and lighting, and can be compatible with the existing lorawan network.Of course, llcc68d can also support proprietary communication protocols, which gives a large number of smart home manufacturers more innovation opportunities.

The author guesses that the current sidewalk protocol corresponds to llcc68d chip, that is, the intelligent hardware using Amazon sidewalk protocol will choose llcc68d chip to realize long-distance communication.As a large-scale application scenario in the field of Internet of things, smart home will form a $100 billion market in the next few years. With the increase of shipments of smart home products, sidewalk and its similar communication protocols in the home scenario will make Lora ecology widely distributed in smart home.

From indoor to outdoor, the territory of smart home ecosystem has expanded

In my opinion, it is of great significance for Amazon to launch sidewalk technology, which is an important step to expand its smart home ecological territory. Because of the low power consumption and long-distance characteristics of sidewalk, Amazon smart home products can go out of the house, and then launch all kinds of outdoor products to occupy the community and personal consumption market.

As Amazon said at the press conference, with the cooperation of sidewalk, users can use the echo speaker in the house to enable the weather station on the sidewalk to understand the rainfall outside, turn on the watering sensor in the garden in the room, and even start the sensor in the mailbox to know whether the mail has been delivered.Traditional WiFi, Bluetooth, ZigBee and other protocols cannot support devices from indoor to outdoor in terms of communication distance. With the blessing of sidewalk, Amazon can continue to launch products for outdoor scenes such as community and personal wear in the future.

Over the past years, as an e-commerce and cloud computing giant, Amazon has launched a variety of cost-effective hardware products, which have a very wide impact in the industry. The typical representatives are Kindle and echo smart speakers.The former is the entrance of Amazon's digital content such as books, music and videos, so as to expand the sales of its digital content;The latter is the entrance of its Alexa intelligent voice assistant, which increases the stickiness of its AI, cloud computing, digital content and e-commerce.

Alexa intelligent voice assistant has been the core of Amazon's hardware ecology. Amazon has opened Alexa to third-party manufacturers to expand the boundary of hardware ecology.Sidewalk can also be considered as another core weapon to expand hardware categories and boundaries. In addition to Amazon's own smart home products, Amazon also encourages more smart home manufacturers to adopt sidewalk technology, so as to form a broader smart home ecology.Of course, with the promotion of sidewalk, the layout of Lora in smart home ecology is further expanded.

Dave limp, Amazon's equipment director, also mentioned 4G / 5G technology, but he believes that cellular networks are expensive and complex, and are not necessarily suitable for the needs of smart homes.In my opinion, Amazon promotes sidewalk technology not only because of these characteristics of the cellular network, but also because the cellular network needs to rely on operators and cannot have an impact on it, and its own communication technology is more conducive to its influence in the industrial ecology.

Of course, to reach a communication distance of more than 1km, the hardware using sidewalk technology needs to be connected to the base station or gateway, and the deployment of base station and gateway is more important.In its external press release, Amazon mentioned that it had distributed 700 test equipment to many families in Los Angeles. In just three weeks, it covered the densely populated Los Angeles area. 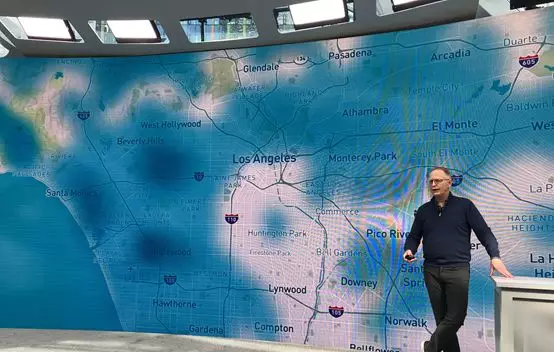 I expect,Most of the 700 test devices should be Lora gateways that support sidewalk specifications。Due to the wide communication distance of Lora, by issuing Lora gateway to families, the rapid deployment of the network can be realized through this kind of "crowdsourcing", covering the main population inhabited areas, so as to support the networking of various smart home products.

The cost of Lora gateway is low. At a Lora conference held in the Netherlands at the beginning of this year, the Lora developer community TTN once released a lorawan gateway of $69. It can be seen that lorawan gateway can achieve low cost.As a private protocol gateway, its cost may be lower than that of lorawan gateway, which has a good foundation for its promotion in the field of smart home.

However, if the sidewalk based smart home products are fully commercial and face customers in all regions of the United States, how can each user who purchases Amazon's smart hardware products have network coverage at that time?Is it a tie-in gateway for users who buy hardware, or is it specially deployed in other ways?This may be an important problem to be solved in the commercial promotion of sidewalk in the future.

Amazon realizes its first mover advantage in the field of smart speakers through Alexa voice assistant and echo, and then drives the development of its smart home ecology. With the development of competitors such as Google and apple, this first mover advantage is gradually weakening.Expanding the territory of smart home categories and expanding hardware ecology with sidewalk may become another weapon of Amazon's first mover advantage. If this technology can bring leading advantages to its smart home ecology, it is not ruled out that other smart home giants will also launch low-power wide area communication technology to expand their territory and create their own ecology in the future.At that time, Lora may quietly enter the ecology of other smart home players again.

When the spotlight is more focused on the dozens of hardware released by Amazon, the low-key sidewalk technology may have a more far-reaching impact on Amazon's smart home strategy and ecology.

This article is transferred from the official account of the Internet of things think tank. If there is infringement, please leave a message in the background and delete it.

Prev：Analysis of security issues in the development process of Internet of things
Next：How big is the GPS gap between China's Beidou and the United States? Core data exposure, Japanese media exclaimed