Events
Home -Events -Industry News -Millet or will not rely on mobile phones to make money, the growth point is IOT?

Millet or will not rely on mobile phones to make money, the growth point is IOT?

On the evening of November 27, Xiaomi group released the performance report for the third quarter of 2019,Revenue in the quarter was 53.66 billion yuan, a year-on-year increase of 5.5%.

And XiaomiThe total revenue of mobile phones in the quarter decreased by 7.8% year-on-year。 The CFO of Xiaomi company admitted this week that the whole Chinese mobile phone market has continued to decline in the past two years, which does put pressure on mobile phone manufacturers. However, Xiaomi said: "at present, it is the transition period from 4G to 5g. We believe that as soon as 5g is opened, the whole smartphone market will be better and better." It is understood that in 2020, Xiaomi will launch at least 10 5g smartphones from China to seize the smartphone replacement cycle brought by 5g.

Aiot strategy "riding on the dust"

Previously, Xiaomi has made good achievements in the field of IOT. According to Lei Jun, Xiaomi will have a good harvest in the layout of aiot in 2018. This year, Xiaomi became the world's largest IOT consumer Internet of things platform, connected 132 million devices (excluding mobile phones and laptops), and more than 100 million activation devices built-in Xiaoai classmate.

On March 7, 2019, Xiaomi group issued an internal announcement announcing the establishment of aiot Strategy Committee. Xiaomi has adjusted its architecture again. Lei Jun also officially put forward Xiaomi's proposal"Mobile aiot" dual engine strategyAnd define it as "Xiaomi's core strategy in the next five years". Although Xiaomi is neither the initiator of the concept of "IOT" nor the only practitioner of IOT, as the pioneer of IOT strategy, even in the current market where giants gather, Xiaomi's advantages can be called "riding on the dust".

Since Xiaomi launched the "mobile aiot" dual engine strategy, Xiaomi's IOT business has developed more rapidly. In the Xiaomi financial report released this time, the revenue of IOT & consumer products business proves this point. In terms of such products, the current revenue of Xiaomi group increased by 44.4% from RMB 10.8 billion in the third quarter of 2018,RMB 15.6 billion by the third quarter of 2019, accounting for 29.1% of the total revenueThis is mainly due to the rapid growth in the demand for other IOT products such as smart TV, home appliances and Xiaomi bracelet, as well as the effect brought by the continuous enhancement of the advantages of aiot platform.

Xiaomi TV is a great contributor to IOT

IOT business has made great contributions to Xiaomi's revenue for two consecutive quarters, of which Xiaomi TV is a worthy hero. In the first half of the year, Xiaomi TV has always been the first TV business in China, and still ranked first in China in the third quarter. At present,The global shipment of Xiaomi smart TV exceeded 3.1 million units, with a year-on-year increase of 59.8%, ranking first in China, the top five in the world. Judging from the current competitive pattern of the smart TV industry, this achievement is not easy.

Six years after Xiaomi launched smart TV, affected by the sluggish market of the mobile phone market, Huawei, Yijia and ov began to gather in the smart TV industry this year. However, Xiaomi did not disappoint with its accumulated user groups and other advantages. In September 2019, the number of monthly live users of smart TV and Xiaomi box reached 23.9 million, a year-on-year increase of 50.1%. Its paying users exceeded 3.2 million, a year-on-year increase of 68.8%.

Zhou Shouzi stressed in this conference call: "The business of our large household appliances department is a very important part of our mobile phone aiot dual engine strategy. We believe that we have experience in smart TV. In order to help us succeed, we have also formulated relevant strategies for other large household appliances around the world, including air conditioners, washing machines, etc. so in the next few years, I We will make a great investment in electricity. " 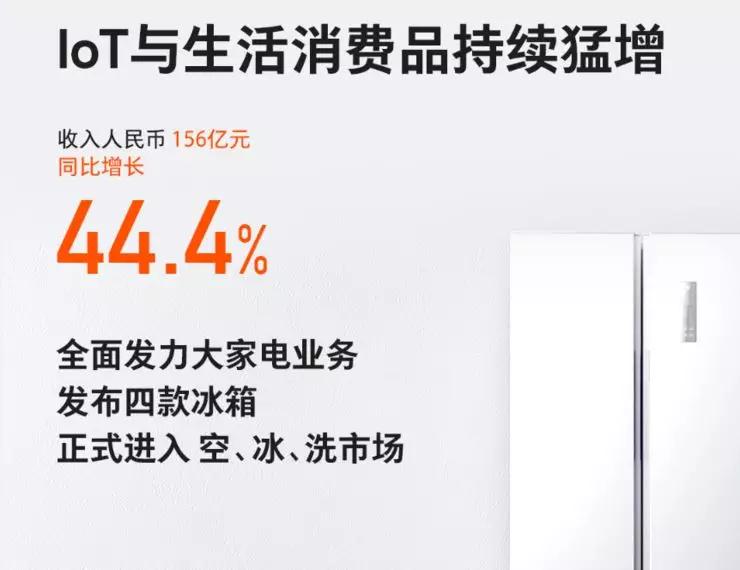 Indeed, on Xiaomi's way to promote the interconnection of smart home, in addition to focusing on the performance of TV products, other electric products can not be ignored. In October this year, Xiaomi released four refrigerators, which means that Xiaomi officially entered the air conditioning, refrigerator and washing machine market, expanding the layout of the field of household electricity.

The reason why Xiaomi has become the leader of IOT and intelligent devices in China is also inseparable from its high attention to the construction of ecological chain and the accumulation of supply chain resources that are difficult for competitors. So far, Xiaomi hasMore than 270 eco chain enterprises, it covers almost all intelligent hardware fields, from power bank and bracelet to floor sweeping robot and treadmill.

The good feedback from the capital market is the greatest affirmation of Xiaomi ecological chain. At present, four enterprises from Xiaomi ecological chain, including huami, yunmi, yujiahui and stone technology, have gone public. Both huami and yunmi successfully landed on NASDAQ last year, and yujiahui and stone technology also landed on GEM and science and innovation board respectively.

Xiaomi is also gradually deepening its control over the supply chain. In addition to supporting ecological chain allies, Xiaomi also began to plan to build its own supply chain and build a future factory in Yizhuang, Beijing this quarter. Zhou Shouzi said: "the reason why Xiaomi wants to build a factory is to make our manufacturing more advanced and intelligent. In the future, it is very important to improve efficiency. However, we will also rely on Xiaomi's existing mature ecology and maintain close cooperation with important factory partners."

In addition to the continuous layout of IOT ecology, Xiaomi has also made great investment in AI and made great breakthroughs in advanced artificial intelligence and Internet of things technologies such as acoustics, speech, natural language understanding, image visual processing and deep learning.

Although Xiaomi's mobile phone business has been weak, it is undeniable that Xiaomi delivered a considerable report card in the third quarter. It seems that the development of IOT, aiot and other businesses has graduallyBecome the key breakthrough object of Xiaomi.

This article is reproduced from“Global Internet of things Watch”, support the protection of intellectual property rights. Please indicate the original source and author for reprint. If there is infringement, please contact us to delete

Prev：No one cares about Huaqiangbei's tomorrow
Next：Beidou has launched another "exclusive" track, and the global networking has entered an all-round sprint period